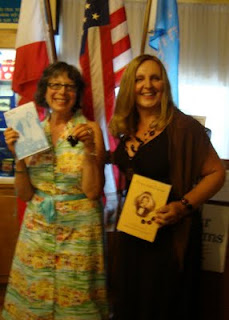 On Sunday, August 28, 2011, the multi-talented Georgia Jones-Davis has delighted her audience at Bolton Hall Museum with a selection of wistful, insightful, and inspiring poems, including a sample from her recent chapbook, Blue Poodle (Finishing Line Press, 2011). The publication party for the book took place on August 14, and Georgia was also featured at Cafe Alibi's monthly reading managed by Alex M. Frankel. In 2010 she was declared an "emerging poet" and recognized by the Los Angeles Public Library's ALOUD series, Beyond Baroque and other poetry organizations.

Georgia started her reading with her contribution to the anthology "Chopin with Cherries" (Moonrise Press, 2010). The genesis of the piece was quite interesting. It turned out that her poem was created during a traffic jam on the 405 and therefore belongs to the genre I created and keep promoting, that of "freeway poetry." She pulled over to write it down, so it was not entirely committed to memory and recorded in writing only after the arrival home - as a true "freeway poem" should be. Leaving the technicalities aside, we particularly enjoyed Georgia's tributes to other creative spirits, mostly poets that she favors, like John Keats and Anne Sexton.

The listeners included poets who came to present their work and to hear the featured poet live - it is always a treat to hear poetry in the poet's own voice. The hall was filled with talent, young and old, and we documented the evening with a couple of group pictures. 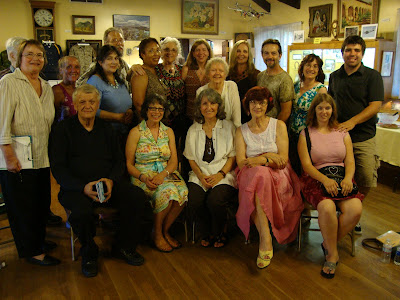 The next Village Poets Reading at Bolton Hall Museum in Tujunga will feature one of the Village Poets, Dorothy Skiles, and will take place on September 25, 2011 at 4:30 p.m. More information about Dorothy's poetry and a sample of her work will be posted here in the coming weeks. 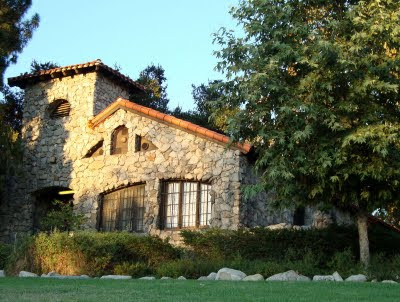 Photos: 1) Georgia Jones-Davis with her Blue Poodle and cherries, and Maja Trochimczyk with Chopin with Cherries; 2) group photo of some poets at the reading; 3) Bolton Hall Museum, Commerce Avenue, Tujunga, CA.

Posted by Maja Trochimczyk at 11:08 PM No comments:

Village Poets at the Watermelon Festival 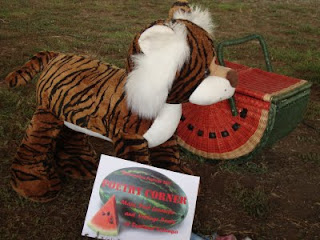 The Magnificent Four, or the Village Poets of Sunland Tujunga: Joe DeCenzo, Marlene Hitt, Dorothy Skiles and Maja Trochimczyk, created and managed a new element at the 50th Annual Watermelon Festival, held at Sunland Park on Saturday, August 13, 2011, from 1:30 p.m. to 4:30 p.m. The Poetry Corner presented new, original poetry for children along with well-known classics by Shel Silverstein, A.A. Milne, and Rudyard Kipling (The Tale of Elephant Child). We recited English and Polish tongue-twisters and sang humorous rhyming children's songs. The model of a home-setting with children's chairs on a giant comforter, scattered with zebra pillows and stuffed animals, was created at a poetry event for the Puppetry Festival at McGroarty Art Center last year. See the photos from that event: Maja and Friends - Poetry Corner. 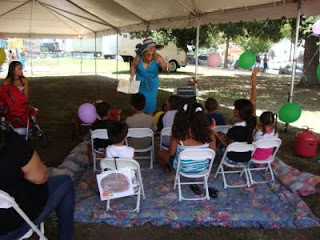 Each of the four poets contributed something: Joe brought the baloons and comforter, Dorothy donated the gifts, Marlene lent us a mike, and I had signs, books, and more comforters and stuffed animals that I cared to carry from my car... Our fifth member, Barry Ira Geller, did not make it, though contributed to advance publicity of the event.

Children came with their parents to rest for 10 - 15 minutes from the hectic pace and excitement of the festival. They sat quietly, listened, read poems from the books provided by poets, and picked up their prizes - colorful balloons and little toys. We planned on two hours, but filled out three - due to the constant ebb and flow of the audience it was hard to find a good time to pack up and go. We are happy that Beverly Collins once again brought her poetry to share in Sunland. 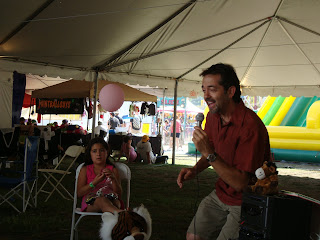 I do not write for children and certainly do not write in rhyme, so I was especially pleased that Joe DeCenzo read from his Ballad of a Hawk and twice recited a very amusing, brand-new poem-game, helping children to learn the names of body parts in English. In his poem, the last word of each couplet is missing and children have to guess what it is..."head" or "chin" or "shin." I noticed quite a few children who were English learners and this was a very good lesson for them.

We also had a couple of older children reading from our stack of books - picking poems they found funny. My contribution included poems "What I love in Sunland" and "On the Beach" for Father's Day, as well as two New Year's Haiku about the Year of the Rabbit. I also sang about The Old Woman Who Swallowed a Fly and recited tongue-twisters about the winsome woodchuck and the warbling warbler, and, my favorite, a Polish beetle rustling in the rushes:

Next year? More poets, and some limericks, I think... the G-rated ones, of course. The photo album is posted on Flickr: Poetry Corner at Watermelon Festival.

On Sunday, August 28, at 4:30 p.m., the next Village Poets Open Reading will feature Georgia Jones Davis. For more information see the previous issue of this blog.

Posted by Maja Trochimczyk at 12:13 AM No comments: