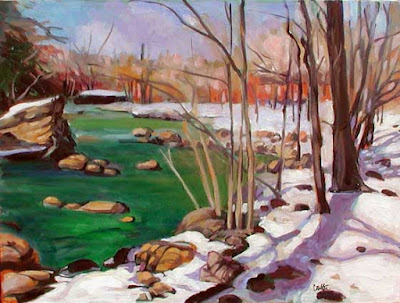 Pam Coulter, "Rock Creek in Winter"
VIDEO FROM THE READING ON YOUTUBE:
https://www.youtube.com/watch?v=yUP-6Pm9cAw

Village Poets of Sunland Tujunga present poet Dean Blehert, of Virginia, on Zoom - Sunday, February 27, 2022, at 4:30 pm.  Link can be requested from Dorothy Skiles at DMHSkiles@gmail.com.  Open mic is available before and after the feature that lasts for 30 min. The reading is recorded and video posted online afterwards. 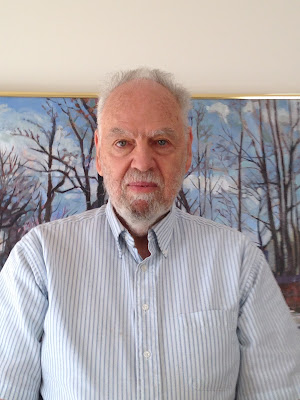 Dean Blehert has had seven poetry books published, most recently Kill the Children and Other Disconnections (Argonne House Press, 2001) and Please, Lord, Make Me a Famous Poet or at Least Less Fat, a 400-page mock textbook full of parody and satire on the poetry scene, past and current. He also published his own subscription poetry letter, Deanotations (Dean's poems with his wife's drawings) which came out every two months from August, 1984 to July, 2004. Deanotations has often been praised for its quirky viewpoints and slightly offbeat humor. Deanotations boasted readers in most of the 50 states and in Canada, England, Germany, Israel and Australia, and had more than 300 paid subscribers for much of its life. He's had poems published or accepted for publication in New York Quarterly, Kansas Quarterly Review, Crosscurrents, Bogg, Visions, Lip Service, Gold Dust, Dark Horse, Modern Haiku, Carousel, Light, The Lyric, Krax, Orphic Lute, Brussel Sprouts, Stroker, Implosion, Haiku Headlines, Reston Review, Carousel, View From The Loft, The Listening Eye, Gyst, Plains Poetry Journal, Minimus, Potomac Review and many others. Issue 55 of New York Quarterly ran his article, "Shrink-rapt Poetry", in its State of Poetry in America series. He's been featured at readings in Calif., New York, D.C., Texas, Maryland, Florida, Arkansas, New Jersey, North Carolina, Pennsylvania, Ohio, Minnesota, Tennessee, Illinois, Iowa and Virginia. He lives in Reston, Virginia.

Besides books, for 20 years (1984-2004) and 110 issues, Blehert published his own “poetry letter,” called “Deanotations,” just his poems with illustrations by his wife, Pam Coulter, that, at its peak, had about 3000 snail-mail subscribers.

In 2001, Blehert began posting approximately a poem a day, emailed to a few thousand people. Many of these short poems can be found here:

Information about his books is on the website as well:
http://blehert.com/bookstore/books.html 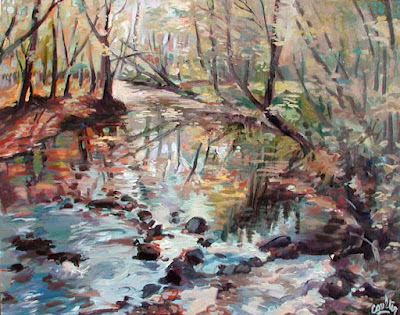 How primly rhymed pentameter sets outIn perfect ranks, plumed hats and gleaming brass,Marching to thumping drums across trim grassTo put the ragged noisy mob to routAnd...oops - WATCH OUT! Who threw that brick? A shout!Hold ranks! Duck! Keep in step - but watch your ass!We'll show this rabble!...Lord, but what a massOf life is this! It surges all aboutEach syllable - the meter cannot hold!Now it's breaking, words stumble from the ranks,bloodied feet fall out of step,rhyme drowned in the din of revoltfalters falls                  look there! On either flankhordes of          words                      loose                characters                                   dart an             d leap
FROMPlease, Lord, Make Me a Famous Poet or at Least Less Fat
or Everything You've Always Wanted to Know About Poetry But Were Afraid If You Asked, Someone Would Start Talking About Whatchamajigger Pentameter by Dean Blehert.
Uproarious book of poetry about poetry. Takes on all comers, Beowulf through Plath and even the poetry slam. No toes go untrodden. Deft, outrageous parody and satire. "Dean Blehert is a radical innovator in contemporary poetry. He has rediscovered pleasure. His poems are - how contrarian - both fun to read and wonderfully perceptive about the follies of modern life. I hope he represents the cutting edge of poetry for the new millennium. But if not, we can console ourselves by rereading him." Dana Gioia. "What a banquet!! -- a feast of wit, wild and wonderful -- incredibly clever!" Lyn Lifshin
ISBN 1-892261-03-0, 416 pp. , indexed by subject and title, illustrated by Pam Coulter, publ. Words & Pictures East Coast, 1999 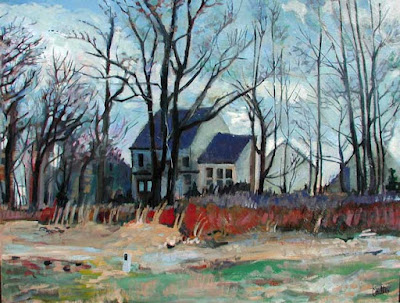 If only this sheet of papercould attract poems as easilyas it attracts the cat.Cat on the couch,Still as any cushion,Except, hanging from the edge,The tail, almost still, just the tipBends up...unbends...bends...unbends...On the carpet, watching,Fascinated,A cat.A tiny bit of nightripples toward me, detachesat my leg, purring.Along the sofa,a sentence of cushions--for period, this cat.
FROM  No Cats Have Been Maimed or Mutilated During the Making of this Book
But Some of Them Are Disappointed -- Very Disappointed -- in Me
Mainstream, Gil Lamont: "Blehert's poems grab me by the scruff of the neck and demand to be read.... It's like eating potato chips, you can't stop at just one. Only the occasional eulogies that brought a lump to my throat made me want to stop for a while, and reflect on cats I've lost over the years.... This is too good a book to keep selfishly. Buy two, one for you, one for your friends, and be grateful that Blehert has so accurately let us look at ourselves too, through our foibles as cats' caregivers and surrogate parents and servants."
ISBN No. 0-9644857-5-3, 80 pp. (Originally published by Words & Pictures Press in 1996)
I Swear He Was Laughing
Poems About Dogs Mostly) Who Only THINK They Are People, But Aren't, So Can't Read This Book, So Will You Please Read It for Them?
For anyone who has ever loved or been loved by a dog. Mainstream, Tina Perry: "...a delightful book of poems about everyone's best friends, dogs. The book made me laugh, smile, and it also brought tears to my eyes." "Dogs sweat through their tongues. /I'm being licked on the cheek /by a dog's armpit." "The dog has had enough cuddling /and uncoils off the bed. /I stare at my skin, /watching for any freckles /that move." "Old friend, I hear one of my years is seven of yours. /I'd slow for you if I could."
ISBN No. 0-9644857-4-5, 81 pp. (Originally published by Words & Pictures Press in 1996)
Poems for Adults and Other Children
This is Dean's fourth book of poetry. Most of the poems in this book are taken from the issues of his popular and momular poetry letter, Deanotations. Some of them are funny and may have been intended that way. One, "The Doll's Journey," may be a story for children; scholars still debate whether the children of Blehert's time could have understood it. The other poems, it is widely agreed, are for grown-ups, but only those who don't understand what the scholars are talking about.
ISBN 0-838823-01-9 (Originally published by Pogment Press in Reston in 1988) 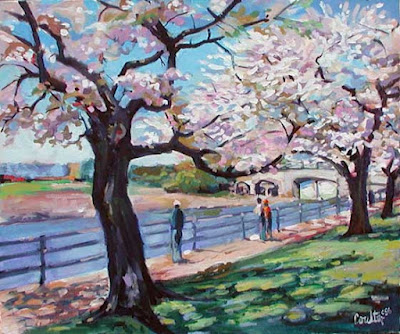 Pam Coulter, "Hains Point, Cherry Blossoms"
ABOUT THE ARTIST
Pam COULTER  (d. 2021) painted primarily in oil and acrylics. She had around 400 paintings in private collections and 4 in corporate or government collections. She was a three-time “Best of Show” winner at the Art League of Alexandria monthly juried show at the Torpedo Factory, Alexandria, VA.  Her paintings were featured in the Elan Magazine (April 2009) and  American Artist magazine (Feb. '95) and included in the North Light Book of Acrylic Painting Techniques (By Earl Grenville). She  participated in regional juried shows and had a number of one-person shows. Ms. Coulter participated regularly in juried Art League shows at the Torpedo Factory, Alexandria, where she had an accepted member of the "Bin gallery" for many years, and in Reston Virginia art shows. She taught art locally at various venues. An illustrator and cartoonist as well as oil painter, she worked as a technical writer and computer graphics artist for a local company.
pamcoulterart.com  and http://blehert.com/gallery/index.html
Posted by Maja Trochimczyk at 11:36 AM No comments: