Back at Bolton Hall: J. Verl Silvester and James Levin on September 27, 2015

Village Poets return to Bolton Hall Museum for the next three readings of 2015. On September 27, 2015, Sunday at 4:30 p.m., the two Featured Poets will be J. Verle Silvester, cowboy poet, and James Levin, host of Priscilla's Readings and those at Barnes & Noble in Burbank. There will be two segments for open mike poets, and refreshments. A donation of $3 is suggested. 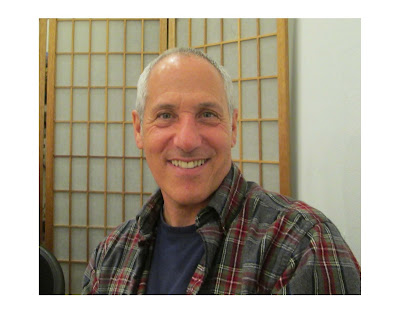 
James Levin
James Levin has just completed his first book of poetry, “Where the Parrot Flies.” These poems are from 2003-2005. 2003 is the year he decided to focus on poetry, realizing he loved writing and reading poetry. He will begin his second book the summer of 2016. James is a graduate of the University of Wisconsin in Madison, spent his junior year abroad in Aix-en-Provence, France and after graduation, two years in French-speaking Cameroon, Africa as a Peace Corps Volunteer. James will begin his 31st year as a teacher for the Los Angeles Unified School District. He has three grown sons and is married to his lovely wife, Susan.

Pedaling on the bike,
early morning stars
study your behavior.
You power through
chilly air,
shift gears,
breathe in
nuanced ways.
You are perspiring,
panting
to the
thump thumping
of your knees.
You feel
increased resistance
up the rise,
then cruise
to a halt.
You dismount,
stretch,
alone
and fulfilled. 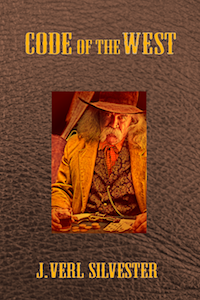 J. VERL SILVESTER was born on the east bank of the snake river and raised in the ranch country of southeastern Idaho and northern Utah when freedom allowed honesty, good manners and hard work as a way of life. Old-timers recognize the Code of the West from days gone by, but they don't hear much about it anymore. Youngsters have never heard about it, and need to. Foreigners should know why Americans are different than people in other parts of the world. Our citizens and leaders ought to be reminded what it was to be an American when cowboys still had freedoms.

The Code of the West was still important to the majority of people as J. worked the farms and ranches in the area - learning about his roots and the history of mountain men and cowboys. He graduated from Weber State College in Ogden, Utah with a Bachelors degree in geography and taught school for a short time. But his favorite times were traveling horseback, leading a pack horse, wearing buckskins, following the old trappers' trails. From that came a film opportunity, Frontier Fremont. He joined the Utah Stuntmen Association and Screen Actors Guild before moving to Los Angeles.

This book has been an on-going project for many years as he has expanded from cowboy to western historian, Hollywood actor and stuntman. He is past president of Chuck Wagon Trailers, an organization founded by cowboys who worked in the early Western movies. He has performed many live shows portraying Wild Bill Hickok, John Muir, Jim Bridger and Brigham Young. He also did stunt shows as well as cowboy poetry, all of which he has written himself. But it seems that everything he writes has one theme: The good ethics of the American Cowboy.

The Westside Women Writers' reading on August 23, 2015 was filled with poetic delights and insights. The photo album is now posted on Picasa Web Albums: https://picasaweb.google.com/Maja.Trochimczyk/VillagePoetsWestsideWomenWriters8232015 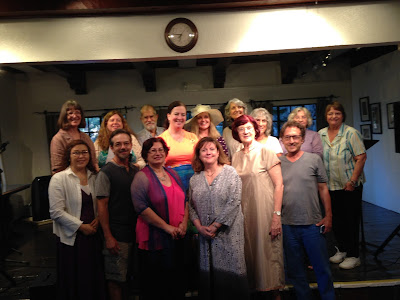 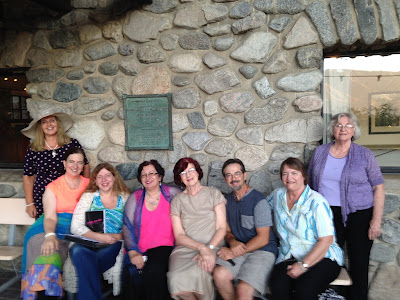 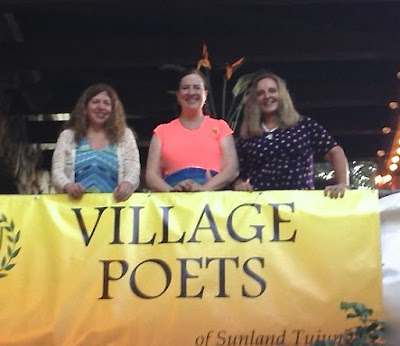 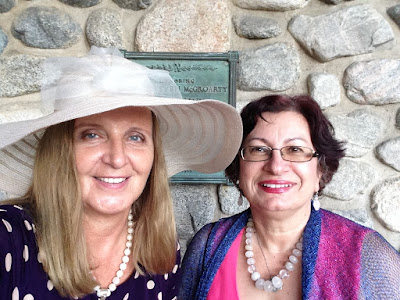 Posted by Maja Trochimczyk at 11:05 PM No comments: