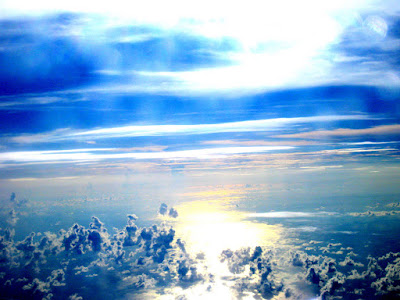 The Village Poets Featured Poet for the month of February 2017 will be Margaret Saine, accompanied on the guitar by Eva Zmijewska.  The reading will take place on Sunday, February 26, 2017 at 4: 30 pm at Bolton Hall Museum in Tujunga (10110 Commerce Ave. Tujunga, CA 91042) and will include two segments of open mike and refreshments. Right after the reading all guests and poets are invited to the Back Door Bakery and Cafe for the Artist's Reception celebrating "Rose of Roses" photography exhibition by Maja Trochimczyk. 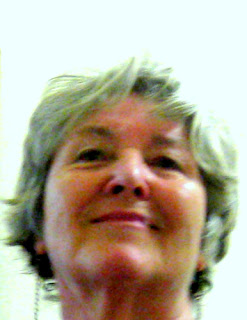 
Margaret Saine lives in Los Angeles. After a doctorate in French from Yale, she taught Spanish at universities in California and Arizona. She writes poetry, haiku, and short stories in five languages and also translates other poets. Her books are “Bodyscapes,” “Words of Art,” and 5 haiku chapbooks. Poetry mss. ready for publication are “The Five Senses,” “Reading Your Lips," "Words of Winter," and "While Alive," as well as “Paesaggi che respirano” [Breathing Landscapes], to be published in Italy. She has recently completed “As You Were Saying,” a dialogue with American poet William Carlos Williams.

Saine's newest book of poetry "Lit Angels" is forthcoming from Moonrise Press in 2017.  The poet Nizar Sartawi from Amman, Jordan described Saine's poetry in the following words:
"n Margaret’s poetry we listen to the inner voice of a poet who is committed to building bridges. Beyond the versatility of her topics, the vividness of her images, and the richness of her style, almost every poem she writes is an expression of this quest – building bridges of peace between people, nations, and, in a very intricate way, between the individual and his or her inner self. "
~ Nizar Sartawi, independent poet, translator, Amman, Jordan 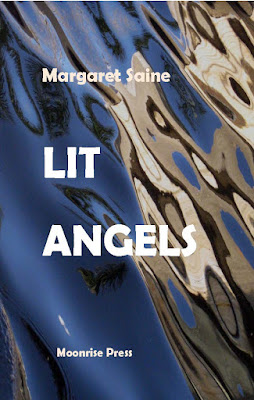 How can you fall in love with a bird
maybe as the voice of someone
you hold dear in your heart but distant.
You long to get your hands

on her, your ears on her hazy voice.
Then in your other dealings
you forget the darling sounds
that promise to wound and heal

so that your daily life becomes
an unctuous and tortuous battle.
Until one day in the plaza

you hear that pristine voice again
from the bird cages of your search
which was a search for the right one. 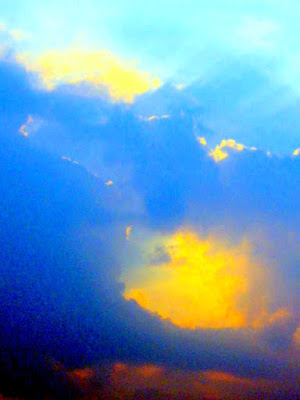 
I love breadcrumbs
and pick them
from wherever they land
tablecloths, sofas, my chest
you name it 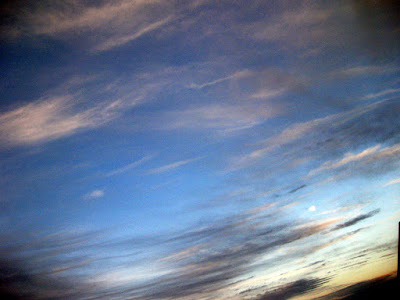 The Sky Photo by Margaret Saine 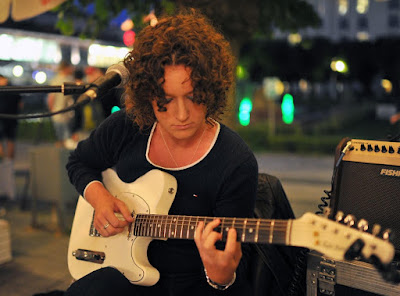 A native of Poland and a resident of Los Angeles, Eva is a singer and guitarist that performs as a half of the Shandy and Eva Duo, and studied music at the Los Angeles College of Music and just started her M.A. studies as a performer-composer at the California Institute of the Arts. She performs and records solo and as a part of the Shandy & Eva Duo that was previously featured by the Village Poets in October 2016.

NOTE: Poems and nature photos above by Margaret Saine. 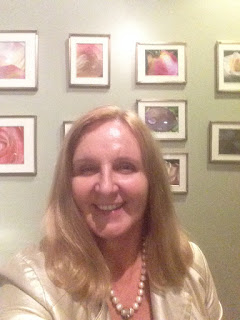 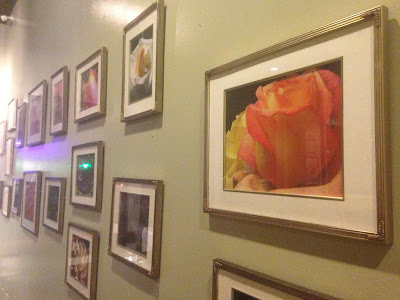 Posted by Maja Trochimczyk at 3:57 PM No comments: 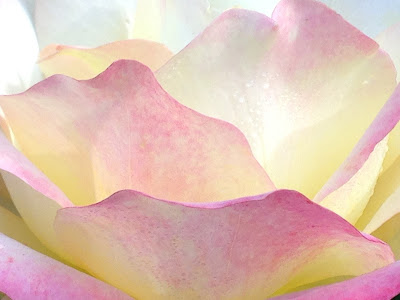 May it flowers with poetry and joy!

Let's start the year in style, with a great poet, Lisa Cheby and a fantastic artist, Susan Dobay, as co-features on Sunday, January 22, 2017 at 4:30 p.m. at Bolton Hall Museum, 10110 Commerce Avenue, Tujunga, CA 91042. The reading will include two open mike segments. Refreshments will be served and $3 donations collected for the cost of the venue, the second historical landmark in the City of Los Angeles, that celebrated its centennial in 2013.  The Museum is managed by the Little Landers Historical Society.

And, if you qualify as a stakeholder of the poetic community in the Foothills, do not forget to apply to serve as Sunland Tujunga Poet Laureate. Applications close on January 15, 2017 and the service starts in April 2017. Here are the links to more information: 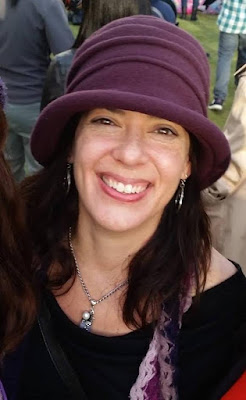 Lisa Cheby’s poems and reviews have appeared in various journals including The Rumpus, The Citron Review, Tidal Basin Review, A cappella Zoo, and TAB: Journal of Poetry and Poetics, which nominated her poem for a 2015 Pushcart Prize. Lisa's poems are also found in the anthologies Drawn to Marvel, The Burden of Light, Coiled Serpent, and Hysteria. Her first book, Love Lessons from Buffy the Vampire Slayer, is available from Dancing Girl Press and was featured in The Wardrobe’s Best Dressed Series. Lisa holds an MFA from Antioch and an MLIS from SJSU. http://lisacheby.wordpress.com

by Lisa Cheby
Everyone one has at least one vice.
If I wear a bonnet when I go alone
to Easter service, am I dating myself?
My mother said she was ready
to die when my sister found
someone to take care of her –
though Mom did not mean
the way you come
into my bed on the night
she died
over and over,                alone
I take this vow to live
my life of little deaths.
\
SUSAN DOBAY - ARTIST

Why did I become an artist?
An artist is an instrument of unknown energy?
Are we given free will or is there a destiny?

In her book An Incessant Search for the Essence of All Art, Susan Dobay hopes to reach more artists, inspiring them to develop conscious artistry, and their own philosophy of art. She delves into the major questions of creative energy and creativity as a force and a significant element of our society, making this essential reading for both artists and those interested in contemporary art.

Hungarian by birth, Susan Dobay resides in California. After studying graphic arts both in Hungary and the U.S, she served as an illustrator for advertising agencies, magazines, and newspapers.

Wanting to explore more creative options, Susan Dobay moved from commercial to fine art, and in 1968 she was invited to join and exhibit with the Alliance of Hungarian Artists both in the United States and abroad. 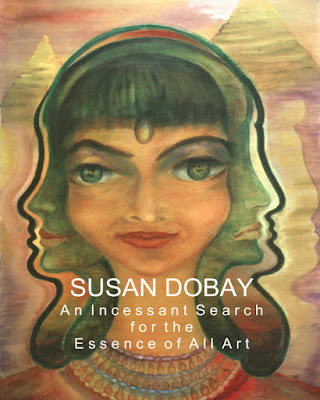 New Book: An Incessant Search for the Essence of All Art
http://www.blurb.com/bookstore/detail/7616682

“Although I derive inspiration from various sources –e.g., music, nature, the human condition -I try to find the balance between mind and spirit. My goal is to involve viewers in a creative game where both the mind and the heart are stimulated.”

“ Her work offers a rich cross section of our century’s spiritual and stylistic movement. Her work is part of that artistic movement which express in a contemporary manner the sensitivity, the mentality, and cultural needs of modern man facing the turn of the millennium.”
“ She has the courage to use the visual tools and forms to say many things in many different ways.”
Gabor O. Pogany, Art Historian, Director of the Hungarian National Gallery

"She is primarily interested in clashing emotions, in opposites. While living in and surrounded  by a society of material worship, her studio in Southern
California stands as a shelter for an idealistic revolution where Dobay ventures into exploring the duality of existence: matter and soul."
Anna J. Winslow, Author

“The monumental yet sensitively refined forms give a unique floating sensation to the work, which reflects simultaneously the  link between artistic tradition and individual trademark of the artist.”
Andras Bohar, Art Critic, Art Today Magazine

“Dobay’s creations have impact not only on the mind, but their unusual concepts and color compositions shake up the emotions too.”
L. Babonici, Ph.D., Art Historian

“I found your work to be quite intriguing and very nice.”
Preston Metcalf, Art Historian

Posted by Maja Trochimczyk at 1:57 PM No comments: