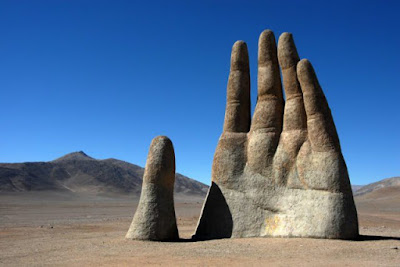 The readings include a featured poet (25-30 min. for one poet, or 20 min. each for two poets) and two open mike segments. Refreshments are served and $3 donations collected for the cost of the venue, the second historical landmark in the City of Los Angeles, that celebrated its centennial in 2013.  The Museum is managed by the Little Landers Historical Society, named after the "little land" that each settler received in the Tujunga and Sunland foothills when the area was settled. The readings adhere to a self-imposed PG-13 rating, without extreme depictions of sex or violence, and with an air of gentility,  so poets use their words to bless the world, rather than curse it.

Born in Calcutta, India in 1942, AR (Andrew) Peterson is a British Citizen. In 1996, he became a naturalized American Citizen. He lives in Sunland, California. Beginning in 1960, Andrew was a technician in various government and commercial laboratories in England.

He took MSc. and Ph.D. degrees in Medical Biochemistry at the University of Manchester, UK, and worked in Cancer Research at the Universities of Wisconsin and Southern California. In 1967 he was the co-author on a patent for the industrial production of gibberellin A7; this compound fools plants into producing fruit without being fertilized—so one gets seedless fruit. Peterson likes to think that he is partly responsible for the seedless grape. Imperial Chemical Industries, U.K., for whom he was working at the time, owned the patent.

From 1986-2003, Andrew taught Chemistry and other sciences, at LAUSD's Grant High School in Van Nuys, California. Andrew has  also worked for the EPA, NIH, The American Cancer Society, and NASA, producing over forty publications in the technical literature. He is co-inventor on two British patents.

In developing and teaching a course on epistemology at the University of Wisconsin in 1974, Andrew acquired the ability to make complicated ideas accessible to non-specialists. He used that ability when he came to teach at USC and high school.

In  September  2003,  Andrew  took  early  retirement  to  write  a  textbook  on chemistry, employing the historical approach that he had been using in high school. He tried out the book when he was recruited in 2005 to teach 9th graders at LAUSD's CHAMPS Charter School. He retired from teaching in 2006.

On a more serious note: Andy is a published poet (sixty poems in two slim volumes), science fiction author (two books on Amazon), a phenomenal troubadour, and a noted wit, whose finely tuned sense of humor has elicited groans from generations of students, and patronizing grins from jealous friends. His published books can be accessed at: ARPETERSON.com. In 2017 he "completed" (it's actually up to the reader to complete) a non-fiction book entitled Your Way. In 2018, he will complete his third SF novel, Hubris. 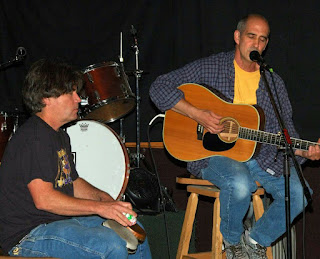 From very diverse musical backgrounds, Singer-Songwriter Art Stucco and Drummer-Percussionist John Palmer met as neighbors in 1988. Discovering several shared interests and influences, they began gigging and recording together. Stucco brings the Folk-Rock-Pop vibe with his songs while Palmer's Rock, Jazz and indigenous percussion influences set the tone and feel. 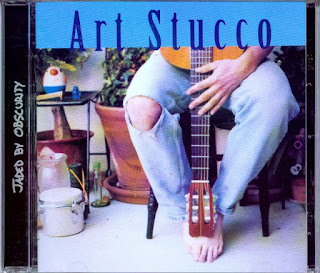 In the studio, Art plays guitar, bass, drums and keyboards and John plays harmonica. Art and John have recorded and recorded with Rockabilly pioneer and legend Ronnie Dawson and The Monkees' Peter Tork. He also performed and recorded with artists James Intveld and Melissa Lee, amongst others. John has toured the world with Dawson, Tork, Intveld and Three Bad Jacks. You can find Art Stucco music on SoundCloud and YouTube. Art Stucco CDs will be available at the show. 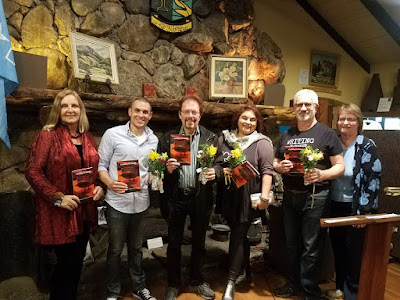 The day, March 25, 2018, also marked the first reading from the California Quarterly Vol. 44 no. 1 that Maja Trochimczyk guest edited, inviting some local poets to contribute. 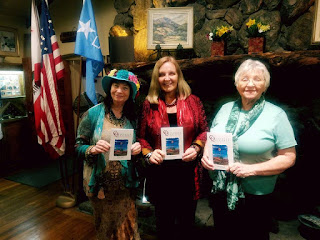 Kathabela Wilson, Maja Trochimczyk, and Marlene Hitt with their copies of the California Quarterly. A sample of their poems published in the journal is below. 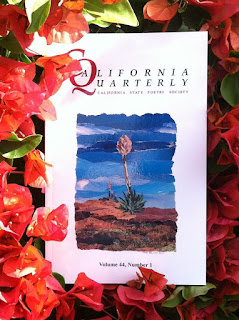 THE WISH OF HEDERA

elegant
calligraphy of vine
poised as if lifted wings
were song 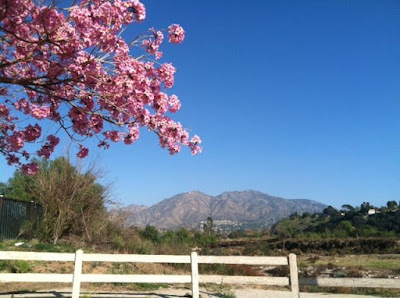 Trees wall the river, tall and green
with leaves big as pie tins, and flowers
yellow flowers that float.
The sky dives so deep into the water
that down is brighter than up.
We paddle upstream against morning sun,
swerve to catch blossoms, save them
though they turn brown on the prow.
A current cradles us, passes us beside taro fields
and forest hideaways made of mangoes, papayas.
We rest our oars.
No conflict is here, no news, no story, no poem.
Only peace. 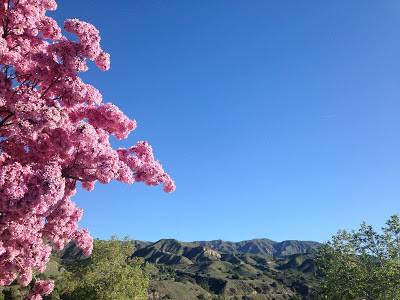 No fear, no hate, not even a mild dislike*—
we leave our heavy burdens, shards of memories
broken, all too broken, at the bottom of crystal stairs
beneath clouds of white camellias, petals swirling
through air like the snow of forgetfulness

Perfect symmetry of blossoms
points the way — up, up, always up
rainbow crystal stairs, revealed
one by one as we ascend — inwards,
outwards — dancing spirals of our DNA

We get to know this place — these depths,
these heights — for once, for all lifetimes

With each step, pure notes resonate
and expand into clear, spacious chords —
the music of the spheres rings out, wave by wave
expanding from our open hearts

Each chord — harmonious, different —
each melody in this vast symphony
sweetly twines around another, and another
until all are One Song, One Wisdom —
of stem and flower, of leaf and root
in this Cosmic Tree of humanity

We have been here
all along without knowing 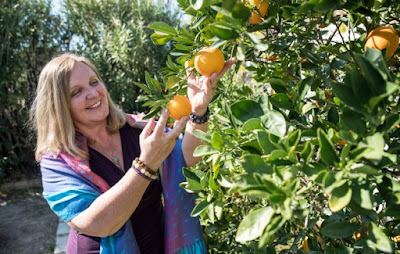 Maja Trochimczyk was recently interviewed by Vitold Janczys and the interview published in Russian in Lithuania,  this photo from her garden is from the interview. Here's the link for anyone who can read Russian. https://www.delfi.lt/multimedija/u-nas-i-amerikie/u-nas-v-amerike-ceny-tozhe-rastut-no-i-zarplaty-uvelichivayutsya.d?id=77319547

Posted by Maja Trochimczyk at 10:43 AM No comments: