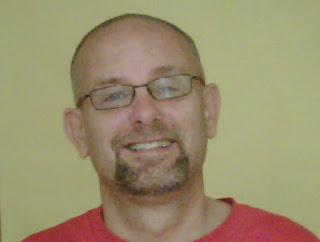 Village Poets will present the next Monthly Poetry Reading at Bolton Hall Museum (10110 Commerce Avenue, Tujunga, CA 91342) on June 23, 2013 with Featured Poet, Alex M. Frankel. It appears we want to feature all hosts of poetry readings in Southern California.

On Sunday, June 23 at 4:30 p.m. we will present poet and host of the famous Cafe Alibi Readings in Pasadena, Alex M. Frankel. The Village Poets Reading will also include two open mike segments and refreshments. The old hat of George Harris (who built Bolton Hall 100 years ago) will be passed around for donations to support our historic venue, City of Los Angeles Historic Monument No. 2.

Alex M. Frankel was born in San Francisco in 1960.  He went to Columbia and studied with Kenneth Koch and lived in Spain for many years. Now he teaches at Cal State LA. His chapbook is called My Father's Lady, Wearing Black.

He will have a full-length book out later this year, called Birth Mother Mercy.  His book reviews now appear regularly in The Antioch Review. He's been nominated by Judith Hall for "Best New Poet" for his poem "SoccerStud16 I Need to Leave This World Come Back as You."

Here are some pictures from the Judith Terzi reading in May 2013. She charmed and inspired us with her wit, intelligence and sensitivity. 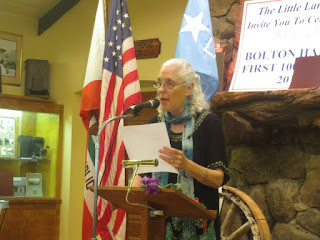 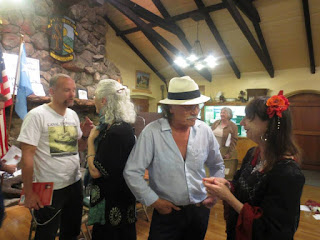 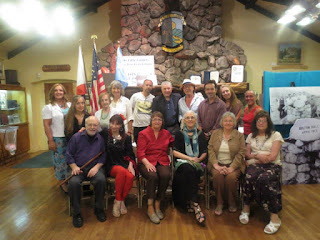 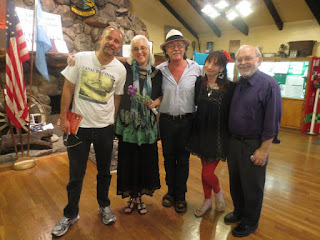 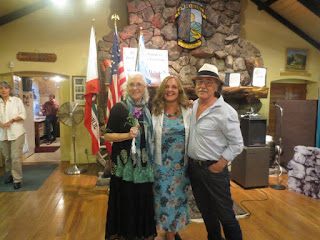 Posted by Maja Trochimczyk at 1:07 PM No comments: 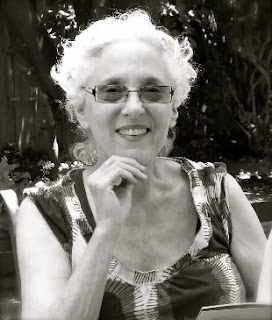 After a phenomenally successful performance by Neil McCarthy, from Ireland to California with Love, we are returning to the Bolton Hall Museum in Tujunga (10110 Commerce Ave., Tujunga, if not, Google it).
Judith Terzi wil be our Featured Poet on Sunday, May 26 at 4:30 p.m. The evening will also include two segments of Open Mike, and refreshments. As usual, we will collect donations for the Bolton Hall Museum, the Second Historical Monument in the City of Los Angeles. Bolton Hall is celebrating its Centennial this year, and we, as poets, are thrilled to be a part of this celebration. 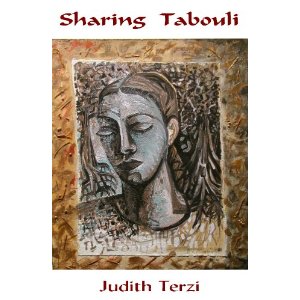 Judith Terzi is the author of several chapbooks including Sharing Tabouli (Finishing Line, 2011). Her poetry has appeared or is forthcoming in Malala: Future Cycle Press Anthology, 2014; Myrrh, Mothwing, Smoke: Erotic Poems (Tupelo Press, 2013); Raintown Review; Times They Were A-Changing: Women Remember the 60s & 70s (She Writes Press, 2013); Trivia: Voices of Feminism; and elsewhere. Her poems have been nominated for Best of the Net and Web and have garnered prizes and honorable mentions. A new chapbook, Ghazal for a Chambermaid, is forthcoming from Finishing Line. A former high school French teacher at Polytechnic School in Pasadena, CA, she also taught English at California State University, Los Angeles, and in Algiers, Algeria. She holds an M.A. in French literature.

Tsunami
starting with a line by Sappho

Who is the one with violets in her lap?
After the earth shook, she rang the bell
to warn the town to run. The women who sell
wool, their skeins spread out like garlands of tulips
and lilies, fled, but what about their shawls,
caps and gloves piled in the beds of trucks?
The sea ripped boats of fishermen like a shark,
twisted roofs and furniture, churches, schools
in its wild walls. The rage complete, it displaced
their planks onto black sand, into forests, streets.
Violet is the light of mourning, luz divina,
luz of healing, luz of valor for Martina.
She is the one with violets; she knits wreaths
for the silt of the río Maule and shredded lace.

You can bet your money on fiesta here,
the women wearing dresses short and tight.
Smoothed, oiled thighs glide onto leather seats,
hips and bare shoulders rocking to the jolts
down Cahuenga Boulevard. I'm face à face
with dazzle, breaths hot and minty after cigs
and the joints hid in compartments,
along with the Don Julio and Casadores tequila.
Twenty of us stream into Club La Vida,
corner of Sunset and Gower, my white hair
stark, stark as bleach as I hit the champagne
trail and the dance floor. Twenty-somethings,
some foxed from liquor, others foxed by me––
a jadis diva circling under the strobes.
I'm photographed, I'm fire-foxed, I'm Lady Gaga'd.
I'm re-fired, re-minted in this Hollywoodland
hormonal blitz. For a moment, I become
the young woman in a black sheath, her dress
almost skimming her crotch. After each groove
and grind, she nudges slippery cloth back down,
her partner holding on to accessible parts,
releasing her, then holding on again until the pulsation
ends. I face down time here, though so much closer
to the index than to the preface of a vida loca.

Photographs from Neil McCarthy's reading at the McGroarty Arts Center are posted on Facebook, and Picasa Web Albums.

Posted by Maja Trochimczyk at 7:10 PM No comments: