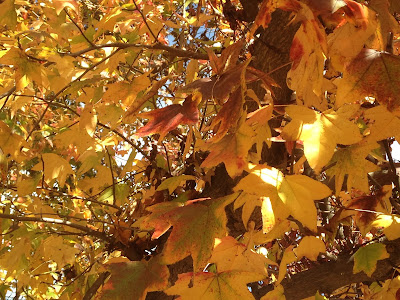 The readings include a featured poet (20 min. each for two poets) and two open mike segments. Refreshments are served and $3 donations collected for the cost of the venue, the second historical landmark in the City of Los Angeles, that celebrated its centennial in 2013.  The Museum is managed by the Little Landers Historical Society. 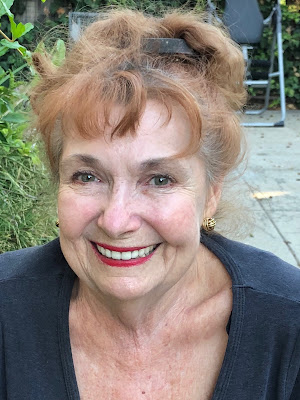 
A small girl dreams of being——everything. Does she succeed?—Not quite ------- but if variety is the spice of life, it’s been a grand success. Ice skater with the once upon a time Ice Follies, artist, creating animal creatures from paint and rock, teacher; US office of Education grant for Creative Dramatics; arts reviewer for midwest tv and a copywriter  too---occasional actress and SAG/AFTRA member——and of course, a rhymer poet, dedicated to the proposition that more can be learned and retained through RHYME, than form note taking.  After all, before writing, there was rhyme, meter and song!  Writing  on  and on and even  sometimes still  tutoring, and having a wonderful time!


The Magic of MOM

Oh, MOM, your name’s a palindrome;
it’s letters they form that.
It reads MOM going to the right.
From left? It reads MOM back!

Dependable that MOM word is,
in quality so true.
The YOU we always do count on,
Today, you get your due!

Three hundred sixty-five the days,
just one we celebrate.
We ought to celebrate you more;
perhaps a weekly fete?

A magic MOM in ambigram,
so please, do take a bow!
For even more——just flip that name,
and MOM turns into WOW!

The HE yells," Charge, but SHE yells,”save!”
Dilemma!  Oh so common!
A frugal SHE, yet spendthrift HE.
Finances had hit bottom!

They tried the ice cube frozen test,
where card must thaw to spend.
“Oh my, “ the weary wife did say,
“HIs patience has no end!”

Then next they tried to list all down,
Each purchase to the cent.
But found the pen and paper bills,
In costs , made not a  dent.

With calculator in his hand,
charge card was wrapped in tape.
He had to figure interest first,
Soon patience met with fate.

“I’m spending that!” He winced in pain.
“This interest costs us dearly.”
SHE  saw his transformation there,
A man was saved, quite clearly.

So HE and SHE, they danced through life,
Both were a little giddy.
Their “interest,” game had saved their lives.
They owed it all to," Piggy!" 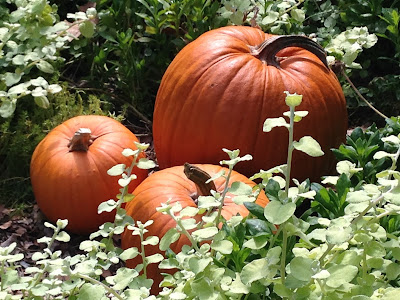 SONNET OF THE SCARY

Even now, this longest night of fear shrieks
a dandy wail of ghosts in kith and kin!
So gather the horrors——monstrous freaks
and all——in dead silence terror stalks in!
Usher in secrets of crumbling walls,
and shadows that cut like a pendulum blade!
Add oval portrait—where beauty she  falls,
muted all beauty in Death;s ghastly shade!
A burial casket———life within lurks!
A needful and ape-like clue will abide.
Castle door  padlocked——yet Death takes his perks;
that oblong box holds a secretive bride!
Ravens and Man—evermore————fright’s alive!

First appeared in the altadenablog in 2013 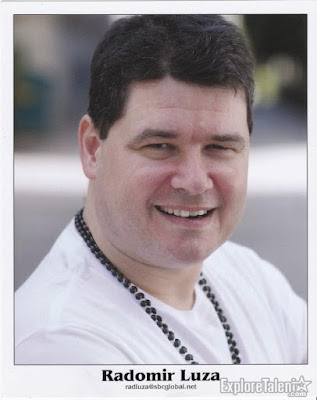 Radomir Vojtech Luza was born in Vienna, Austria in 1963 to renowned Czech parents.  The Tulane University and Jesuit High School Graduate (New Orleans) has been Poet Laureate of North Hollywood, CA for over six years.  The former President of the North Hollywood West Neighborhood Council in Los Angeles and 1997 Bucks County, PA auditor candidate is a Pushcart Prize Nominee, author of 30 books, a Marquis Who's Who Lifetime Achievement Award Recipient and Writer's Digest and 2018 Highland Park Poetry Challenge Honorable Mention.  His poetry has been published in over 90 anthologies, literary journals, blogs, newspapers, magazines and other media.  The veteran stand-up comedian has featured his poetry over 100 times across the country.  Luza is also a SAG/AFTRA/AEA union actor, theatre and book critic and host/curator of over a dozen poetry readings throughout the country, including UNBUCKLED: No Ho POETRY at T.U. Studios in North Hollywood, CA with Mary Anneeta Mann.  He edits and publishes the literary magazine, VOICES IN THE LIBRARY.

To find out more about Luza as artist and critic go to
http://atthetheatrewithRadomirLuza.com.

Row 13 seats A and B
Mother and me

Stands up and blurts out
Her best German

The slaughter took place and
Was very bad, she says

Finally free
Without apathy
Mother sits down
In B 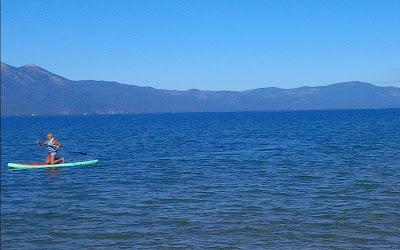 SUMMER OF ADVENTURE, CAMPING, AND POETRY


This summer, I had a couple of weeklong vacations that were recuperating, renewing, regenerating, and inspiring. In early July, I connected with poetry through nature and the camaraderie of new friends as a participant in the program Drawing Inspiration from the Parks, led by John and Ann Brantingham. This past year, John was named the first Poet Laureate of Sequoia and Kings Canyon National Parks, and this is the fifth year of the Parks program. John leads the writing workshops, while Ann directs the artists, although many of us delved into both means of artistic expression. 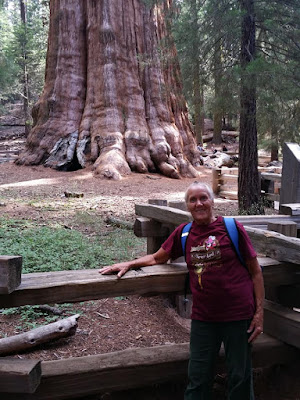 Writers and artists from all around the USA attend workshops, hone their skills, do homework (although I slacked a bit on this part), do volunteer work in both parks, and have an amazing time. We pitched our own tents in the volunteer campground, brought and prepared all our own food (stored in bear boxes, of course), saw lots of wildlife, watered tree seedlings in Kings Canyon National Park, pulled out invasive plants from a meadow in Sequoia National Park, and so much more. Information on the program can be found on the Facebook page (“Drawing Inspiration from the Parks”). I hope to do this again next summer, so please let me know if you are interested in participating. 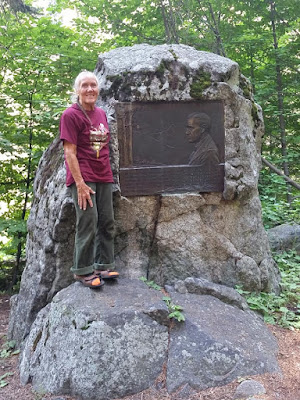 Come, my friends, and grow tall like the trees,
With hearts on fire for protecting our lands.
Capture bugs, breezes, and butterflies
In your souls as you scoop and caress soft sand.

Let the forest silkiness embrace your bodies
As flickering stars in dark skies light the way.
Nature can nourish, sustain, and uplift,
Leading on paths of peace to much brighter days. 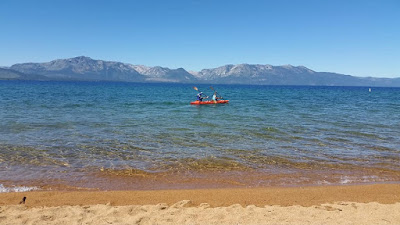 My second excursion was another camping trip, this time to beautiful Lake Tahoe. This was my second family-and-friends reunion camping trip, which was a time of celebrating our common pasts while making new memories. As a child, I vacationed with my family at Lake Tahoe, where I learned to love the serenity and beauty of Big Blue, also known as Lake of the Sky. This trip was a time of remembrance while also strengthening current relationships. I came home refreshed and ready to resume my life in beautiful Sunland-Tujunga. Both trips gave me confidence as an individual and as a poet, and many poems resulted from these amazing experiences. 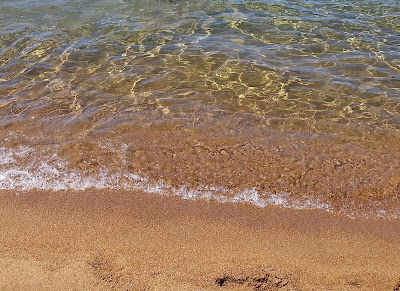 The reading by Margaret Saine and Eliecer Almaguer on September 22, 2018 was full of poetic and artistic delights.  Margaret translated Eliecer's Spanish poems into English and they read those together. Then she presented her work from the Gardens of the Earth book, so recently published by Moonrise Press that the author has not yet seen a copy. 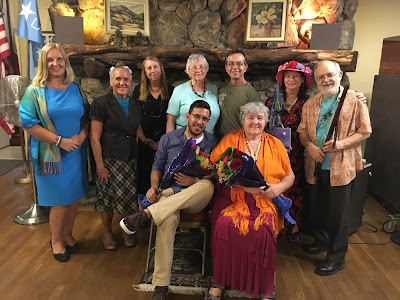 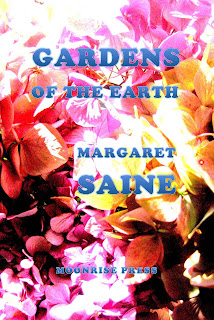 In the Open Mike section, Kathabela Wilson presented her prize winning work, and Rick Wilson performed on a replica of a Native American flute. Fascinating! 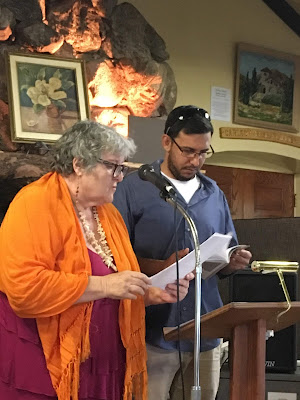 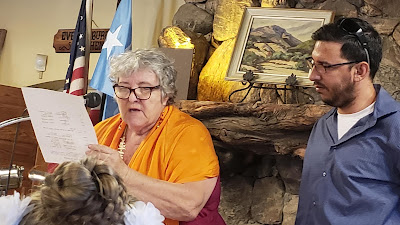 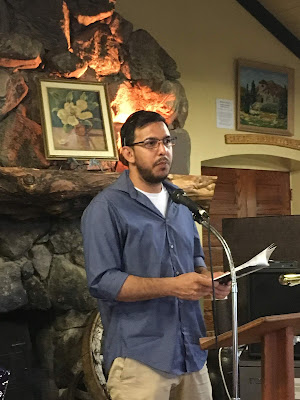 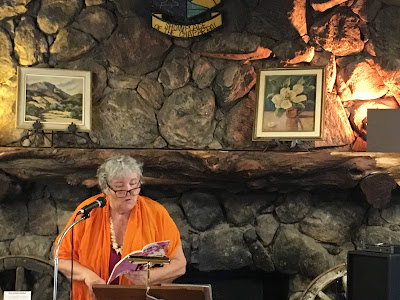 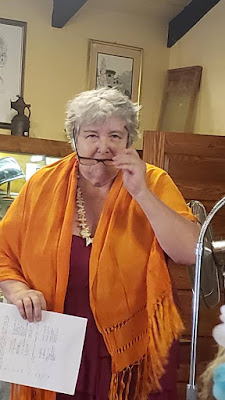 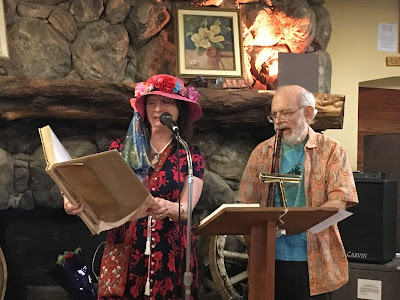 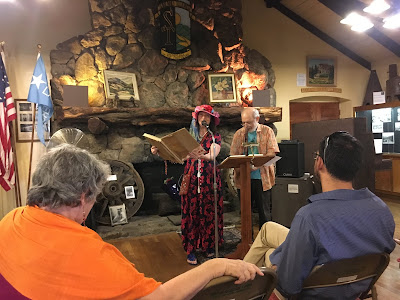 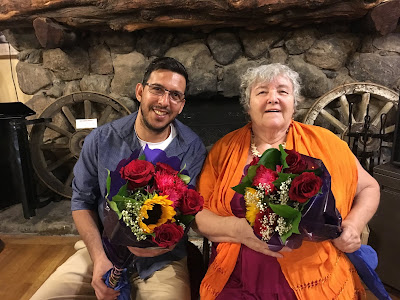 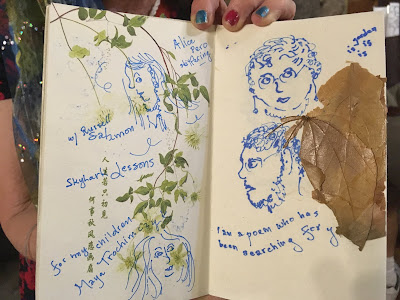 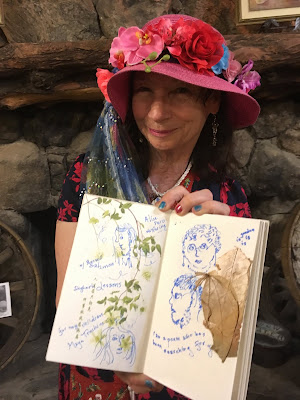 Kathabela with her poetic notebook.


Posted by Maja Trochimczyk at 4:20 PM No comments: