The Lullaby of Teeth Anthology Reading on March 25, 2018

On March 25, 2018 at 4:30 p.m. at Bolton Hall Museum in Tujunga (10110 Commerce Avenue, Tujunga, park at Elks Lodge half a block away on the other side of Commerce) Village Poets of Sunland Tujunga will present 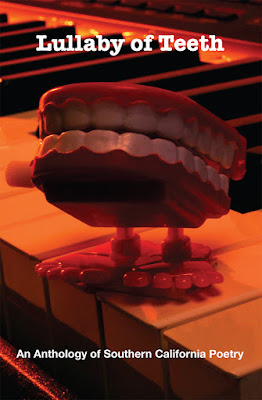 The reading will also include two segments of open mike and refreshments (catered by Lydia Grant). The  George Harris hat will be passed around to collect suggested donations for $3 per person for the upkeep of the Bolton Hall Museum, built by George Harris 105 years ago. 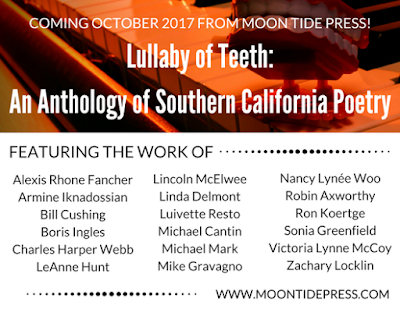 
Eric Morago is a Pushcart Prize nominated poet who believes performance carries as much importance on the page as it does off. He is the author of What We Ache For and Feasting on Sky. Currently Eric hosts a monthly reading series, teaches writing workshops, and is editor-in-chief and publisher of Moon Tide Press. He has an MFA in Creative Writing from California State University, Long Beach, and lives in Los Angeles, CA.

Beirut-born, Southern California-raised Armine Iknadossian is the author of United States of Love & Other Poems (2016). She has been featured most recently in The Altadena Poetry Review, Angels Flight Literary West, Entropy and The Rise Up Review. Her work can also be seen in the Alabama Literary Review, Arbutus, Pearl, Rhino, Split This Rock and The Nervous Breakdown. Armine has an MFA in Poetry from Antioch and has worked as a teacher, as assistant editor to Arianna Huffington, Robert Scheer and Molly Ivins, and most recently as bookstore manager of Beyond Baroque, a beloved, Los Angeles literary institution. Since 2013, Armine has been a Writing Consultant for The Los Angeles Writing Project through CSULA. She was recently chosen by Red Hen Press to be one of their Writers in the Schools. Find out more at armineiknadossian.com.

Charles Harper Webb's latest book, Brain Camp, was published in 2015 by the University of Pittsburgh Press, which will publish his next collection, Sidebend World, in 2018.  A Million MFAs Are Not Enough, a collection of essays on contemporary American poetry, was published by Red Hen Press in 2016.  Recipient of grants from the Whiting and Guggenheim foundations, Webb teaches Creative Writing at California State University, Long Beach, and is working on a novel.

Bill Cushing lived in various states, the Virgin Islands, and Puerto Rico before moving to California. Returning to college after serving in the Navy and working on commercial ships, he earned an MFA in writing from Vermont’s Goddard College. He teaches at East Los Angeles and Mt. San Antonio colleges. He’s published in Aethlon, Brownstone Review, Mayo Review, Newtown Literary, Spectrum (as one of the “Top Ten Poets of L.A. in 2017), both volumes of the award-winning anthologies Stories of Music, and West Trade Review. His current project, “Notes and Letters,” combines poetry with music and can be found on Facebook and Youtube.


The failed body, the failed mother, the failed love, Lullaby of Teeth: An Anthology of Southern California Poets explores the hazards of being human in a world of forest fires, daughters, inaugurations, pests, and social awkwardness. We are asked to “Read between the lines of code” and see as these poets have seen. With realistic language, sharp and vivid imagery, and a variety of forms that reveal their breadth of talent, these 18 Southern California poets have not failed in forging an anthology that readies the world for crisis and epiphany alike.

– Danielle Mitchell, author of Makes the Daughter-in-Law Cry and director of The Poetry Lab

With a combination of new and established poets, A Lullaby of Teeth showcases the variety and power of SoCal poetry. The common thread of these poems is their humanity. They tackle real issues of life, and death, with heart, insight, and, often, humor, so that the reader both feels and understands them.

— G. Murray Thomas, author of Cows on the Freeway and My Kidney Just Arrived.

The "Eclipse Moon" anthology was the "feature" at the Bolton Hall reading for February. After the two "featured readers" presented their own recent work (Deborah P Kolodji and William Scott Galasso), we were treated to a real poetry feast. Ms. Kolodji selected haiku from the anthology to create a lovely and thoughtful narrative. It was read by William Galasso, Kimberly Esser, Greg Longenecker, and Deborah P Kolodji. Kathabela Wilson and Rick accompanied the poets on flutes (Rick), tamboura and percussion (Kathabela). The four readers were given bouquets of camellias from Maja Trochimczyk's garden at the end of the reading. Refreshments prepared by Marlene Hitt included finger sandwiches by Lydia Grant.

Dorothy Skiles commented: "The carefully woven tapestry of haiku delivered on stage by Deborah and Scott and other members of the Southern California Haiku Study Group on 2/25/18, echoed through the hall of the Bolton Hall Museum!" 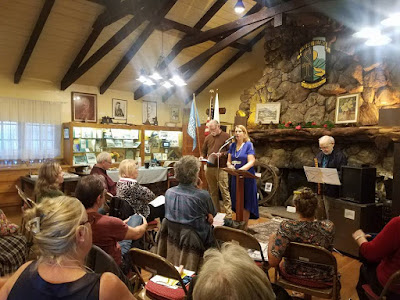 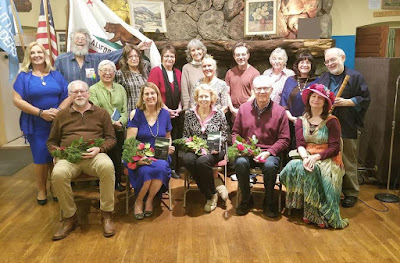 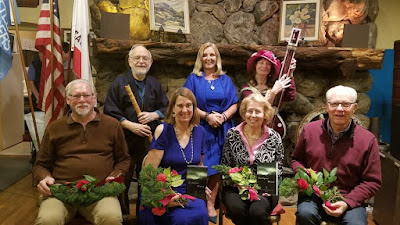 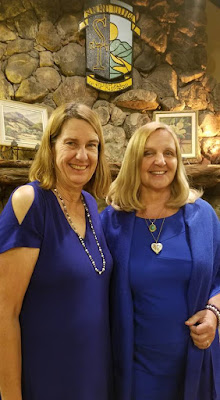 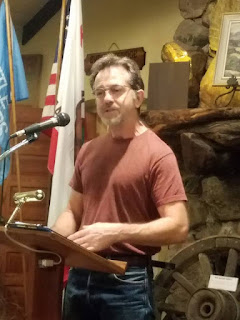 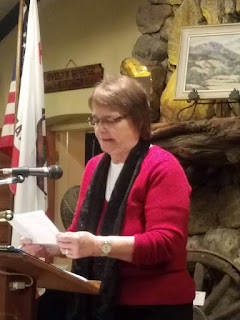 Posted by Maja Trochimczyk at 4:53 PM No comments: