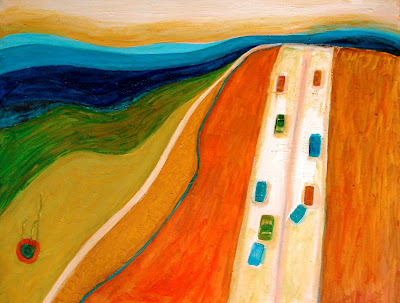 The Village Poets's next reading will take place on Sunday, November 24, 2019 at 4:30 p.m. at Bolton Hall Museum, 10110 Commerce Avenue, Tujunga, CA 91042.  Village Poets  will present the wonderful Singer, Songwriter, Poet, Actress, and Community Activist, Cile Borman. She will share the afternoon with the featured artist - painter, poet and writer Andy Kolo (Andrzej Kolodziej), the founder of Polish Krak Poetry Group and of the Krak Art Group of California-based artists. The reading will include two open mike segments. Refreshments will be served and $3 donations collected for the cost of the venue, the second historical landmark in the City of Los Angeles, that celebrated its centennial in 2013.  The Museum is managed by the Little Landers Historical Society. 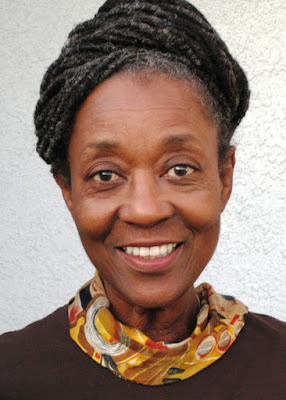 Music is the motivating force in Cile’s life.  She has traveled all throughout the USA cultivating her singing voice and perfecting her audience communication stills. Cile’ has appeared in Liberia West Africa, and throughout Germany.  She was the opening act in Japan for the Temptations and has always combined original material with popular favorites in her exciting show.  From Anchorage, Alaska to Jackson Hole, Wyoming, from Seattle, Washington to Hollywood, California Cile’ has become a popular performer.  She got her start singing with the jazz orchestra at Roosevelt University in Chicago Illinois.  Her evolution from jazz to rhythm and blues has been influential in helping her to develop her own style that she has use to blend with her love of Caribbean music and culture.  Cile’ has included the playing of the steel drum into her presentation.  The steel drum was conceived, and developed, on the island of Trinidad.

Cile Borman has lived in Lake View Terrace, California, since 1982.  She and her husband writer and keyboard player Mike Borman, have received awards for their performances of their original musical projects for young people. In their songwriting collaborations, Cile writes the texts and Mike Borman writes the music. From being a lyricist it is a short way to become a poet-musician, in the ancient tradition of singers who sang texts that they wrote themselves.

During the late 1990's the Los Angeles Cultural Affairs Department created neighborhood arts councils all over the city.  Cile was very active in the creation of the Northeast San Fernando Valley Arts Council.  Nine panels 4ft. By 4ft.  panels, representing communities located in the Northeast Valley were researched, designed and painted by highschool students from the area and displayed through out the city culminating with the Los Angeles City celebration of the millennium in the year 2000.  Cile, recognizing the importance of these panels has made sure that these panels are stored in specially designed cases, in a safe environment, for future display.

The Los Angeles Cultural Affairs Department also awarded Cile a $3,000.00 grant in 2001 to present Her original musical "We Are The Future" at the Lake View Terrace Recreational Center.  Ms. Borman enlisted community members to donate time and funds for lighting, set decorations, and rehearsal space. She auditioned and rehearsed the talented young people from her community, whom she paid to do a successful one night performance. 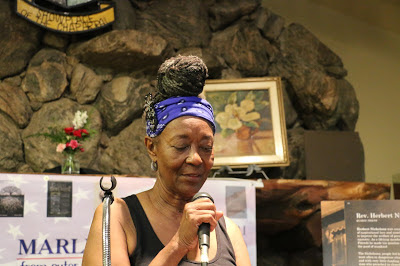 She has served and continues to serve on numerous community boards. She served as the Outreach Chairperson for the Foothill Trails District Neighborhood Council (FTDNC) and was one of the essential people who worked to get, FTDNC certified and through the process of having an elected board. Cile Borman serves as a member of the board of the Lake View Terrace Improvement Association (LVTIA).  She also has been a past president of LVTIA, and serves on the "LVT Friends Of The Library" committee. Cile was Vice President of the Small Wilderness Area Preservation (SWAP).  This is an environmental group united to help preserve open space for the public.  Cile is President of 4 July at Hansen Dam Committee.  She has been a dedicated volunteer contributing her time to this committee for almost a decade.  She feels this is and event that should always be a part of the Northeast San Fernando Valley's yearly calendar.

Here are some of the other community groups and projects that she is presently involved with: The Friends of the Lake View Terrace Library, Lopez Canyon Advisory Committee, the Tujunga Watershed Council, the Day Of The Horse Celebration and Snow Day at Hansen Dam.  Cile also has been an offical a judge for the Pacoima Christmas Parade and has recently become a member of the Pacoima Chamber of Commerce.

Her other project include:
a) Funded by the Department Of Public Works, $10,000.00 Beautification Grant Program 2006 to transform the southwest corner of Foothill Blvd. and Osborne Street into a community beautification project entitled “Cultural Vista.”
b) Helping to mentor high school girls as part of her involvement with Beta Pi Sigma Sorority Inc. Zeta Chapter.

Telephone poles marching,
Tumble weed rolling,
I miss your touch, so very much,
The radio keeps me company,
The songs wile the miles away,
I realize you never think of me anymore,
And it hurts, because i still think of you,
I pause at a crossroad to brush away a tear,
I wish you were near, sitting right here,
Sharing the landmarks that we use to share,
I remind myself again, that you no longer care,
Golden aspen beside a stream,
I pause to take in the view and to dream,
Ahead in the distance, the desert is aglow,
With the lights of the city, that we use to know,
I check in downtown,
and walk the blazing streets where we use to go,
I miss you so,
From my window i view,
a neon cowboy waving at me, he reminds me of you
I decide to take in a show, i’ll dine alone,
At a place where we use to go,
I still miss you so,
I watch the couples and at first i feel jelousy,
My eyes fill with tears, because now i see,
I needed this weekend to revisit the past,
So i dress for the road,
I change my purfume,
I’m on the move again, and not a moment to soon
Headed back to the city the future is clear,
The journey to the past, was bitter sweet,
A place where ghosts live and meet,
Love never dies, it only changes. 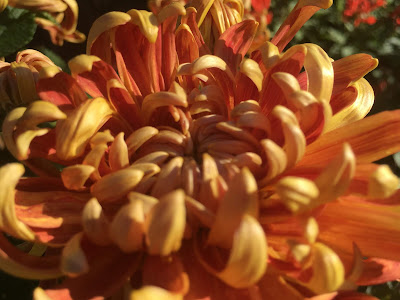 WHAT IS THE BLUES

Displaced manhood
Corrupted womanhood
Too many children
Up to no good
Blood on the highway
Blood in the tall trees
People gone mad, crying the blues

I hear the outcry, the lyrics don’t lie
They make my blood run, hot & cold
I hear the wailing i know the torment
I feel the pain, down deep in my soul
…………..that is the blues 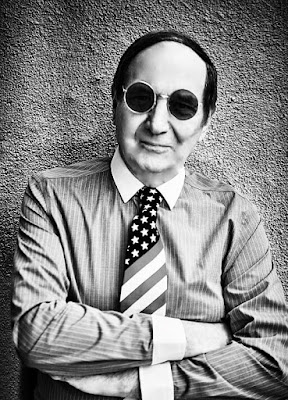 Andrew Kolo is a California artist, painter, poet and playwright born in Poland. He graduated from the Faculty of Fine Arts at the Nicolaus Copernicus University in Toruń with the title of Master of Arts in Painting and continued his studies in Paris and Los Angeles. He is the leader of the Krak Art Group that held many large exhibitions, for instance "Polish Identity" at the Bergamot Station in Santa Monica to celebrate Polish Regained Independence in 2018. 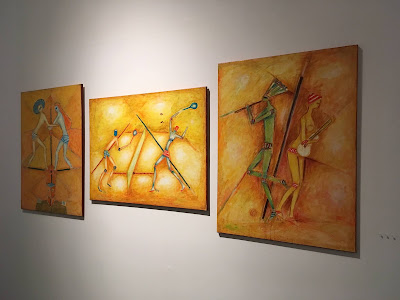 Artwork by Andy Kolo (Andrzej Kolodziej) at Krak Art Group Exhibition Polish Identity
at the Bergamot Station, Santa Monica, November 2018. Photo by Maja Trochimczyk
Kolo's vocation is art, his passion is poetry. His poem: "America of an Immigrant" won the 1st prize in the national-wide poetry magazine competition: LUCIDITY Poetry Journal in Houston, Texas. Andrzej founded "Krak Poetry Group" in Los Angeles consisting of Polish-American poets and "9 ½ POETRY", a group that promoted the work of young American poets.  He is the author of a collection of poems and satirical arts POLKA DOT TUXEDO published by Xlibris. Based on his script, MY MARILYN was filmed. His play THE TRIAL OF DALI "was presented in Los Angeles, at Hollywood, at the Hollywood Fringe Festival in June 2019, and in Sydney, Australia. 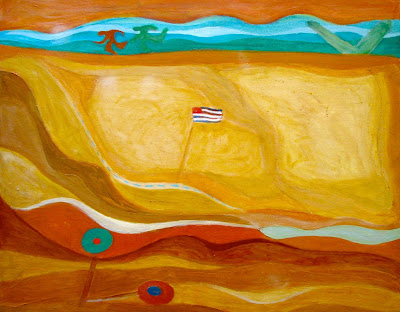 Eyes of Picasso
are bigger than yours.
More self-confident
Than ours.
He sees
More forms and colors
Than you and I.

Then he transfers
The objects through
A prism of Cubism.

Eyes of Picasso
Always wonder.
Directed toward
The canvas
Are like eyes
Of an eagle.
Registering the smallest
Shades of color.

Eyes of Picasso
Are like eyes
of a madman.
First they discover beauty
then they mercilessly
deform it, regardless
if it is a landscape,
still life,
wife
or a lover. 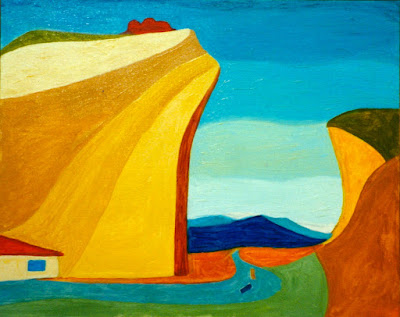 In the Garden of Eden brightly colored
flowers and bushes never cease blooming
and never knew winter.
The fig tree belongs to you - my dearest
and the olive one - to me.
Make yourself comfortable in their aromatic shade.

In the tangled branches snake is hissing softly.
Under an apple tree Adam and Eve, embracing.
I give you sons and daughters – she whispers
tucking him into an animal fur coat.
This delicious fruit called an apple
can only make you stronger - my beloved.

the first snowflakes are beginning to fall
upon the flowery Garden of Eden
like the first sins.

Andrew Kolo, with Maja Trochimczyk, and Leonard Konopelski
at the opening of the exhibit by Antonina Konopelska, 2018, Vienna Woods Gallery.

During the event, poems from the most recent issue of the California Quarterly 45:3 will be presented. 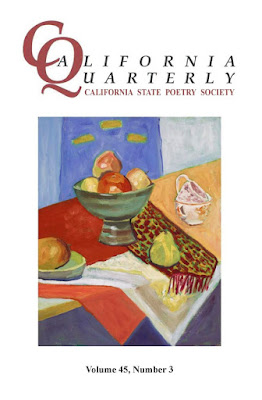 Contents, and a note about Russell Salamon by Lois P. Jones
https://www.californiastatepoetrysociety.com/2019/09/california-quarterly-453-autumn-2019.html

This issue of California Quarterly (published since 1972) contains a tribute to Russell Salamon by Lois. P. Jones and a selection of his unpublished poems. Russell was one of the editors of CQ, and died this year. His poem "Redwood Trees" was posthumously nominated for the Pushcart Prize 2019 by the volume's editor, Maja Trochimczyk

Established in 1971, The California State Poetry Society is the official state organization representing California to the National Federation of State Poetry Societies (NFSPS). We were incorporated on August 14th, 1985 as a 501(c)(3) organization, so donations above the membership level are tax deductible. Donor and patron support ensure (1) the quality publications of the CSPS continue and (2) our mission to promote poetry and art in California and around the world continues to grow. Information regarding renewal and patron contributions is on the Membership page. The CSPS began publication of the California Quarterly in the fall of 1972. 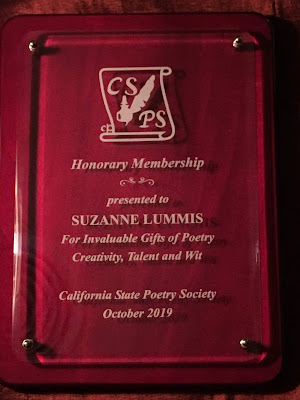 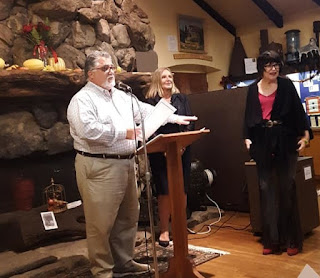 In addition to CSPS Honorary Membership certificate, Ms. Lummis received a Certifcate of Appreciation from Senator Anthony Portantino who read his own poem. He is a poet and a great friend of poetry; he came in person to our event because he owes a huge debt to Ms. Lummis, who encouraged him to read his own poetry at public literary events. We are all so grateful to Suzanne for all she does for poetry and for her insights and talent! 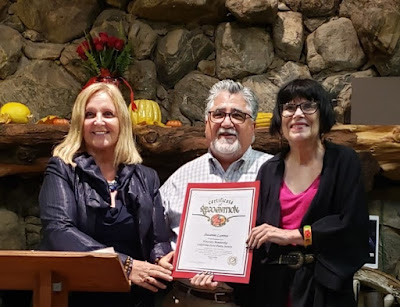 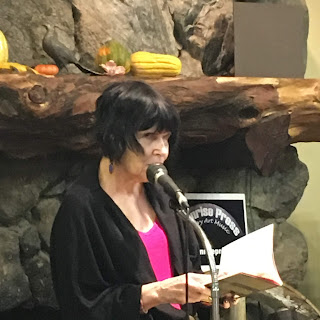 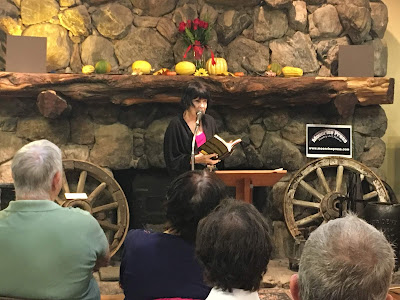 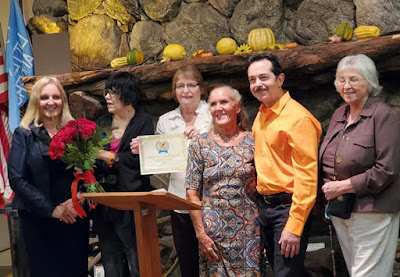 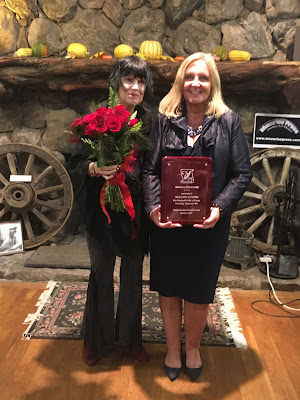 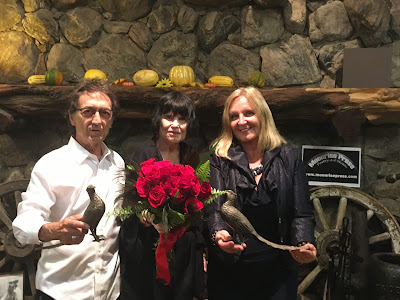 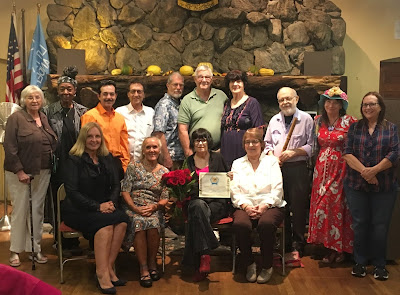 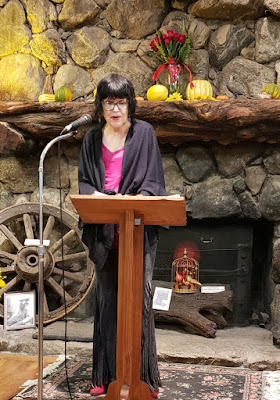 In addition to the  certificates from Sen. Portantino and Village Poets, congratulations were offered to Ms. Lummis by CSPS members who attended the ceremony: Kathabela Wilson, Pamela Shea, and Ed Rosenthal. 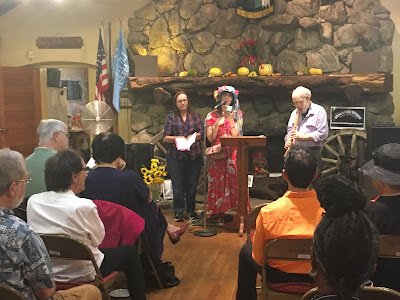