Marlene Hitt and Brenda Petrakos - Featured Village Poets on May 24, 2015

Poets are welcome to sign-up for the open reading upon arrival.  Light refreshments will be served – a $3.00 donation is appreciated! 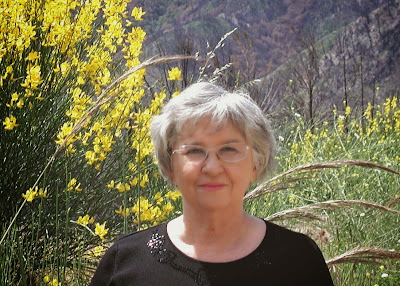 Marlene Hitt is a Los Angeles poet, writer and retired educator with local history as an avocation. She has served  for many years as archivist, historian and docent at the Bolton Hall Museum in Tujunga. She is a native Californian and a graduate of Occidental College in Los Angeles. She studied casually at CSUN, UCLA, USC, Glendale College and Trinity College in Dublin, Ireland. As a member of the Chupa Rosa Writers of Sunland for nearly 30 years, she has worked with this small group of poets from which has sprung readings at the local library, the Poet Laureate Program of Sunland-Tujunga, and the currently popular Village Poets.

Her poetry received several first prizes in annual competitions of the Woman's Club of San Fernanado Valley, and many awards from the John Steven McGroarty Chapter of the California Federations of Chaparral Poets. Her work appeared in Psychopoetica(U.K.), Chupa Rosa Diaries of the Chupa Rosa Writers, (2001-2003), Glendale College Eclipse  anthologies, two Moonrise Press anthologies Chopin with Cherries (2010)  Meditations on Divine Names(2012). Also, Sometimes in the Open, a collection of verse by California Poets Laureate. She published Sad With Cinnamon, Mint Leaves,and Bent Grass(all in 2001), as well as Riddle in the Rain with Dorothy Skiles, and a stack of chapbooks for friends and family.

Her most recent book, Clocks and Water Drops appeared in May 2015 from Moonrise Press. Poet Jack Cooper commented: "Clocks and Water Drops is a book of treasured gifts packed in memories and reflections as tasty as homemade bread, fanciful as a rose petal salad and healing as warm camphor oil on a child's skin. Marlene Hitt's astute and thoughtful voice paints a world as gentle as lamb’s wool and precious as a girl’s first pony. Open this cedar chest of poems, don its knitted socks and prepare to chase the moon through love and time." Kathabela Wilson noted: "Marlene Hitt is a poet beyond measure... she holds each thing to her eye and finds inner correspondences. She finds in the mind - an empty glove, a "back alley" and wonders what words to write, as we all do, on a blank page, or "the bronze grave marker" she buys for herself. Each of her poems works on several levels, and almost always ends with a very interesting surprise or revelation. The significance of each detail is stunning and inspiring."
Ms. Hitt, elected Woman of Achievement for year 2001, served as Poet Laureate of Sunland-Tujunga 1999-2001, at the turn of the century. She has published books on local history, including Sunland-Tujunga from Village to City (Arcadia, 2000,2005) based on columns written for The Foothill Leader, Glendale news Press, North Valley Reporter, Sentinel, and Voicof the Village newspapers since 1998. Over the years she has  taught in elementary school, preschool, worked in a pharmacy, chaired committees, tap-danced, and played English Handbells in the Pasadena Rose Parade.  She is currently in a ukulele class and has been elected to the Sunland-Tujunga Neighborhood Council. Any success she has had she dedicates to her support group: husband Lloyd, children and grandchildren, her biggest fans. 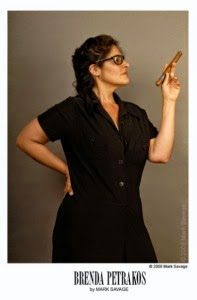 Brenda Petrakos is a storyteller, performance artist, award-winning playwright and Pushcart–nominated writer.  Her dynamic, tell-it-all approach has won over audiences in California, Chicago, New York, London, and Edinburgh, Berlin & Sweden.  Petrakos is a widely published poet whose work can be found in literary magazines and anthologies including Poetic Diversity, Falling Star, Voices Of New Women Writers (Duke University Press), Magna Poets, Houston Literary Review, Red Fez, Three Rooms Press, Oakland Review, and many more. She has three books published by Sybaritic Press: The Book of This, Country Fixins, and Stories from the Inside Edge, which has been adapted for both stage and screen. Stories from the Edge, an evening of Petrakos’ stories directed by E. Amato featured performances by Los Angeles poets and actors and the short film “Cop.”

ln 2007, Petrakos took Stories from the Edge to the Festival Fringe Edinburgh, performing with John Burton, Jr. “Cop” also screened at Cinema Slam, Park City, Utah. Several stories from the collection are under option, including “Too Tall Diane,” “Violet’s Bed,” “Indiscretions,” and “The Curtain.” “STANLEY”, a feature screenplay she co-wrote with Joel Sachs is currently in development.  From 2007 – 2012, Petrakos was a host of the venerable Los Angeles reading The Rapp Saloon. With a background in stand-up and writing sketch comedy for Showtime, CBS and Fox, she volunteers her experience and time leading comedy improv workshops for at-risk youth.  She is a founding member of International Word Bank Productions and CFO of Baxter Daniels Ink Press.

Reviews:
“…the kind of writing one would expect from the spawn of William S. Burroughs and Virginia Woolf had the child been privy to frequent visits by favorite aunt, Nancy Spungen.”
~Wenzel Jones/Hollywood Reporter

“… Petrakos clearly deserves the Nobel Prize for Literature. When I started reading Stories from the Inside Edge, I was blown away by their depth, their complexity, their exuberance and their pure genius. No one reflects and celebrates better or more poignantly, the highs and lows of life, love or loss in contemporary America. Her stories are emotional dynamite … with a psychological complexity that makes a reader feel that Dostoyevsky was a bit too shallow. Buy this book! Read this book! Keep this book close!
~Dr. Edward J. Swanon

“The best of the selections … seem painfully, or beautifully, real. Nelson Algren wrote like this and I can think of absolutely no higher literary compliment or comparison to make.”
~B. J. Merhol

Posted by Maja Trochimczyk at 9:13 AM No comments: