Village Poets and Guests in the Independence Day Parade 2019 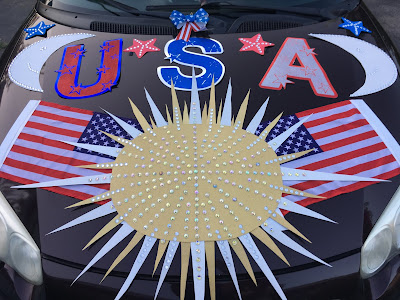 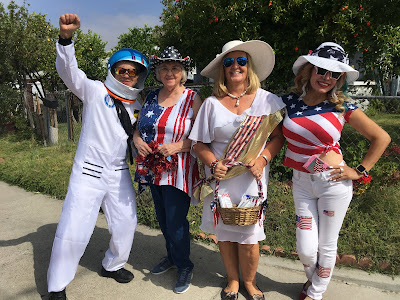 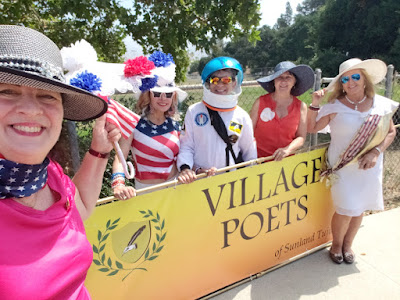 Look for the Poets' Convertible in this year's Independence Day Parade of Sunland-Tujunga on July 4, 2019 starting at 10 am. The Parade goes down Foothill Blvd, from Mt. Gleason to Sunland Park. Below are biographies of the poets and guests who will appear in the parade this year. Riding in the Poets' Convertible will be poet Susan Rogers, mezzosoprano Katarzyna Sadej, artist Antonina Konopelska, President of Polish American Film Society Elizabeth Kanski, and scientist Barbara Nowicki.  Walking the route with the Village Poets banner will be Joe DeCenzo with Josephine.  Maja Trochimczyk will give out postcards with poems, including those posted on her blog: http://poetrylaurels.blogspot.com/2018/07/independence-or-interdependence.html 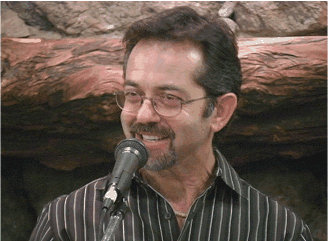 JOE DECENZO grew up in Los Angeles and majored in theater and English Literature. From 2004-06 he served as the third poet laureate of Sunland-Tujunga. He produced the Shouting Coyote performing arts festival and was a Department of Cultural Affairs grant recipient. His published works include The Ballad of Alley and Hawk and the Study Guide and Poetry Primer. His poems also appeared in Meditations on Divine Names anthology (2012) and on Village Poets blog. Joe currently serves on the planning committee for the Village Poets of Sunland-Tujunga and as Chair of Poet Laureate Search Committee. In addition to his volunteer work for Village Poets, Joe DeCenzo was involved in developing or creating: 2002 Shouting Coyote Poetry Festival, 2004 Shouting Coyote Performing Arts Festival, 2005 Mother's Day Brunch at Bolton Hall, and 2006 Commerce Ave Fair/Shouting Coyote Poetry Slam. 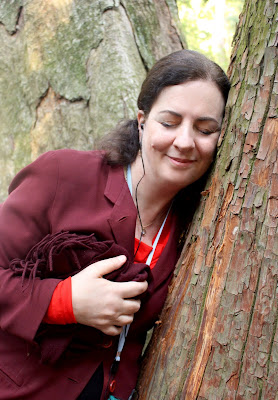 SUSAN ROGERS considers poetry a vehicle for light and a tool for the exchange of positive energy. She is a practitioner of Sukyo Mahikari— a spiritual practice that promotes positive thoughts, words and action. www.sukyomahikari.org  She is also a photographer and a licensed attorney. Her poems were part of the 2009 event “Celebrating Women, Body, Mind and Spirit,” the 2010 Valentine Peace Project, the 2010 event “Poetry: A Garden to the Human Spirit” held at Cypress College in Cypress, California, the 2010 Poem Flag Installation by Global Alchemy Forum and have been performed at museums and galleries in Southern California. In 2010 she was Writer of the Week for “Words, Spirit and You,” sponsored by Tiferet Journal. One of her haiku won Honorable Mention in the 2010 Kiyoshi and Kiyoko Tokutomi Memorial Haiku Contest sponsored by the Yuki Teikei Society of Haiku. She was a featured poet at the Moonday Poetry Reading Series in 2011. Her work can be found in the book Chopin and Cherries, numerous journals, anthologies and chapbooks and can be heard online or in person as part of the audio tour for the Pacific Asia Museum in Pasadena, California. She was recently interviewed by Lois P. Jones for KPFK’s Poets Café. She appeared at Village Poets readings as part of the Westside Women Writers. 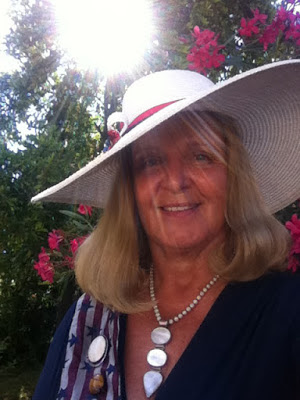 MAJA TROCHIMCZYK, Ph.D.,  is a Polish American poet, music   historian,   photographer, and author of seven books of poetry, including Miriam’s Iris (2008), Slicing the Bread (2014), The Rainy Bread (2016), Into Light (2016), and two anthologies, Chopin with Cherries (2010) and Meditations on Divine Names (2012). Her poems appeared in such journals as the California Quarterly, Cosmopolitan Review, Ekphrasis Journal, Epiphany Magazine, Lily Literary Review, Loch Raven Review, Lummox Journal, Quill and Parchment, Pirene's Fountain, Poezja Dzisiaj, The Scream Online, Spectrum and anthologies by Poets on Site, Southern California Haiku Study Group, and others. As a Polish music historian, she published seven books, most recently Górecki in Context: Essays on Music  (2017) and Frédéric Chopin: A Research and Information Guide (rev. ed., 2015). A former Poet Laureate of Sunland-Tujunga, she is the founder of Moonrise Press, President of California State Poetry Society (and member of Editorial Board of the California Quarterly), Board Secretary and Communications Director of the Polish American Historical Association, and Senior Director of Planning at Phoenix House California. Her research studies, articles and book chapters appeared in English, Polish, and in translations in ten countries. She read papers at 90 international conferences and is a recipient of honors and awards from Polish, Canadian, and American institutions, such as the American Council of Learned Societies, the Polish Ministry of Culture, PAHA, McGill University, and the University of Southern California. Two solo exhibitions displayed her photographs of leaves and roses.

Elizabeth Kanski is a translator, editor, and producer from Warsaw, Poland. For the past 10 years, she served as President of the Polish American Film Society that organizes the Annual Polish Film Festival in Los Angeles. Her credits as a producer include: Forgiveness (2008), Esther's Diary (2010) and Why Be Good? (2007). She holds an MA degree in Applied Linguistics and is a translator in Polish, English, German and Spanish. She serves as a correspondent for Polish film-related magazines and as media is attending the majority of film festivals held in Los Angeles. Former Board member of the Helena Modjeska Culture Club in Los Angeles.

Marlene rode separately in an old pickup truck, with a banner that honored the motto of the parade, by saying "From Outer Space to Inner Space" and displaying the covers of her poetry books. 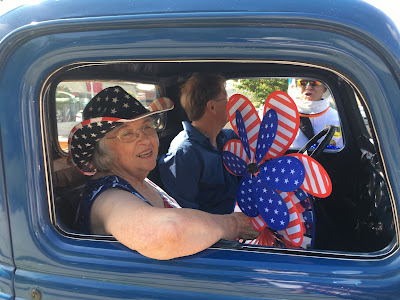 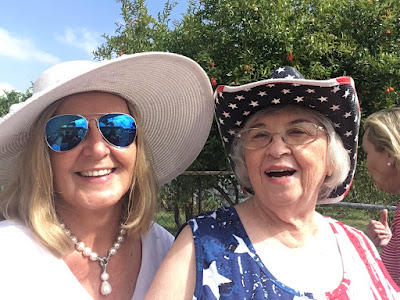 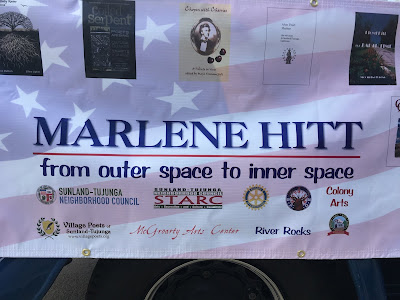 VILLAGE POETS AT THE PARADE IN THE PAST 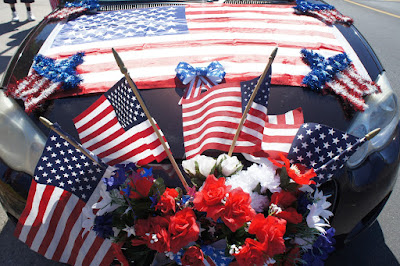 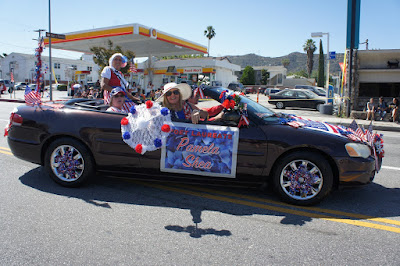 Parade in 2017 with Pamela Shea Poet Laureate as Betty Ross 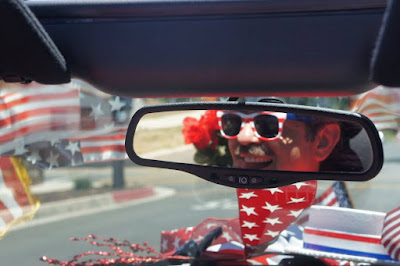 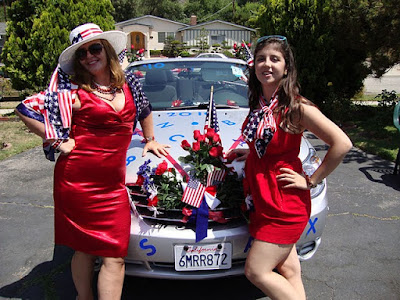 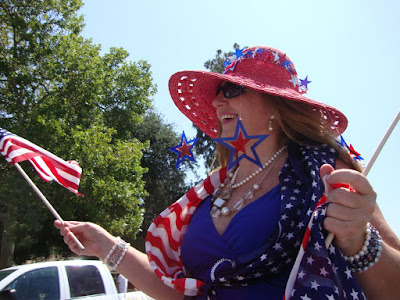 Maja Trochimczyk at the Parade 2011 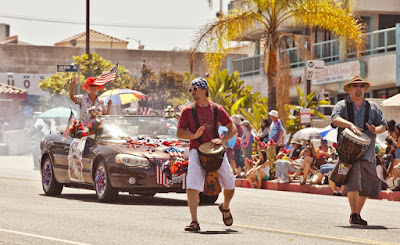 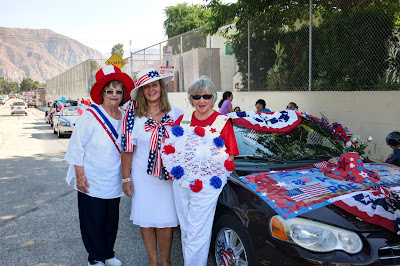 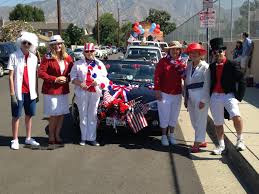 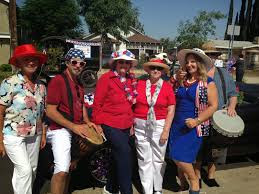 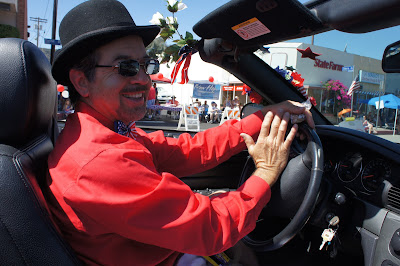 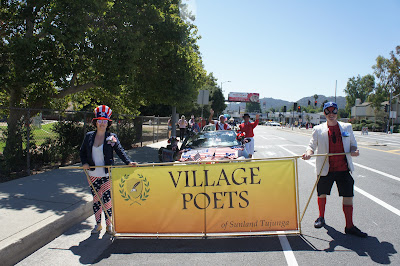 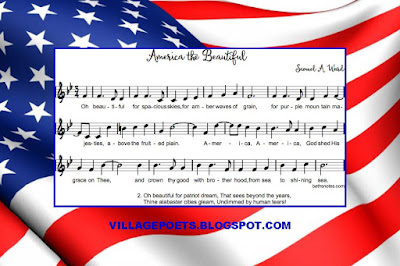 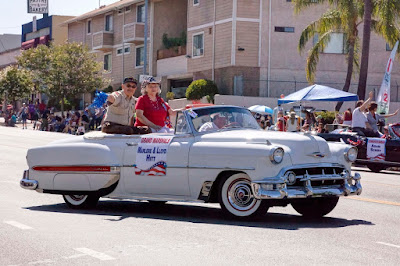 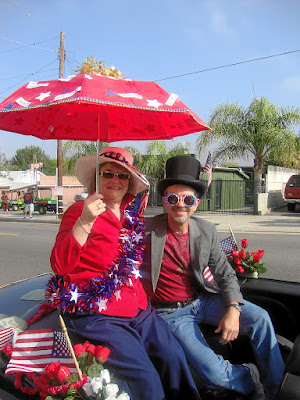 Dorothy Skiles and Joe DeCenzo in 2015 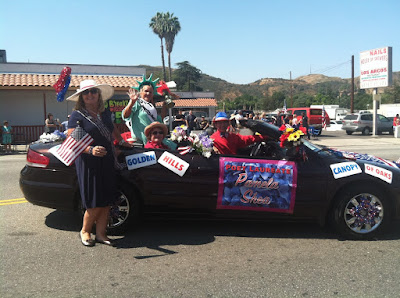 The Poets' Convertible in 2018 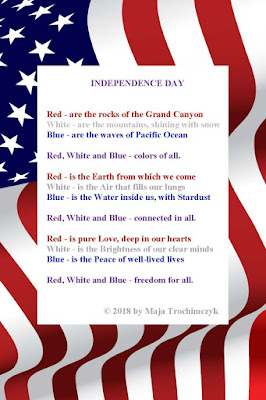 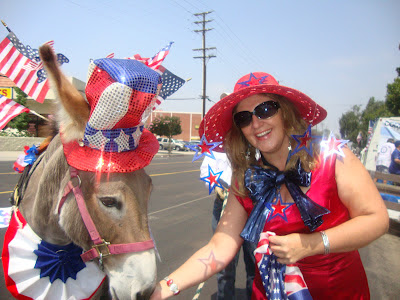 Posted by Maja Trochimczyk at 7:49 PM No comments: