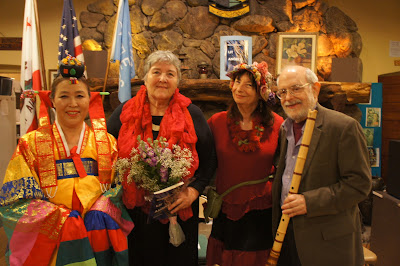 On Sunday, September 23, 2018 at 4:30 p.m. the Village Poets Monthly Reading at Bolton Hall Museum (10110 Commerce Avenue, Tujunga, CA 91042) will  present Margaret Saine with her new book Gardens of the Earth (Moonrise Press, 2018), and Eliecer Almaguer.  The reading will last for 40 min. and will include two open mike segments.

Refreshments are served and $3 donations collected for the cost of the venue, the second historical landmark in the City of Los Angeles, that celebrated its centennial in 2013. The Museum is managed by the Little Landers Historical Society, named after the "little land" that each settler received in the Tujunga and Sunland foothills when the area was settled.

The readings adhere to a self-imposed PG-13 rating, without extreme depictions of sex or violence, and with an air of kindness and gentility,  so that poets use their words to bless this world that we all love. 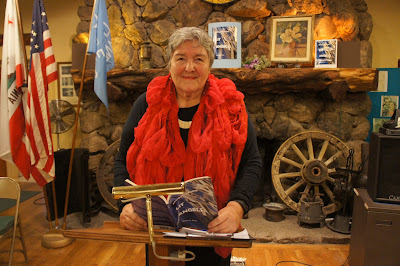 Margaret Saine is a literature buff who was born in Germany and lives in Los Angeles. After a French Ph. D. from Yale, she taught Spanish and French at Californian universities. She writes poetry in five languages and also translates poets in those languages. Her books are “Bodyscapes,” “Words of Art,” and 5 haiku chapbooks. She has been writing haiku daily since October 2008. Her most recent poems in English are Lit Angels, published in 2016 by Moonrise Press and presented at Bolton Hall in the same year. 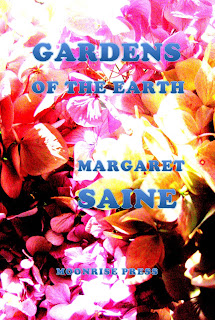 Wind in the Pepper Tree

The wind flows through the tree
brushing brashly all leaves aside
he makes them dance
pulls them this way and that
bends, pushes, rips, presses and pulls again

Wind limbers the limbs of the tree
he tests her arboreal essence
assures her survival, her wholeness
her roundness in future cycles
of growth, to hold her volatile crown
like a cloud, to flex at all comings

Assuming her fixed and pliable
place in the landscape

From the ms. “Gardens of the Earth”  published by Moonrise Press, Sunland-Tujunga, editor Maja Trochimcyk, 2018.

all the lights
of the stars
of the sky
and of heaven
moments between
the all of me
and the all of you
the all of women and men
WHO  ARE THEY?
all our rides together—ha!
all of the trees
the loves if dreams
ours of whole cloth
all things considered
AND WHO IS TO SAY
all stories told
all time and space
all sound
and all silence
stories we have
inside us becoming

from the ms. “Breathing Underwater,” currently being translated into Spanish by Khedija Gadhoum.

Só sei que tinha o poder duma criança
I only knew that I had the power of a child
Ruy Belo, Homem de Palavra[s]

Letter to the
unknown
duo and trifecta
from my
unconscious

from the ms. “A Book of Travel” 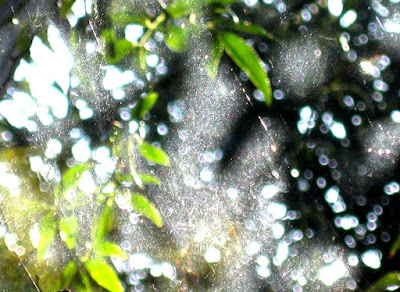 I have been writing at least one haiku a day since November 2008 and the count is at ca. 4500. I write them in five languages and sometimes combine them to cycles or stories.

curtains, a trumpet
theater decorations
we sit in the dark

the woman, the man
the child, the watchman, the fool
our hearts aglimmer

we drown in their pain
and we rejoice, their success
changes us inside 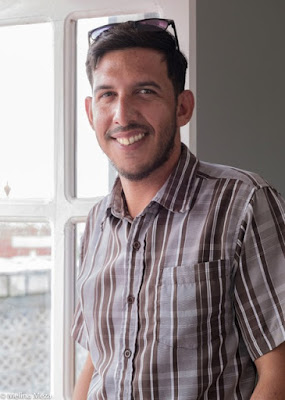 Eliécer Almaguer is a poet and author of fiction who was born in Holguín, Cuba and has been living in Santa Ana, California. For many years Almaguer worked to organize literary workshops for diverse public groups. He has published the books “Canción para despertar al forastero” [A Song to Waken the Stranger], “Si Dios voltease el rostro” [If God Turned His Head], “La flauta del solitario” [The Flute of the Lonely Man], and “Distorsiones del shamisen” [Distortions of the Shamisén]. He has received, among others, the national poetry prize Adelaida del Mármol, and the prize Puerta de Papel.

A sample of his poems translated by Margaret Saine:

Somebody said: there exists a central fabric in your poetry, an obsessive idea feverishly elaborated, with pointillism, like those artists who do fine acupunctures on the skin of the engraving. I would really like to understand how I write. How I manage to name words, without them asphyxiating me. I imagine they might arrive hooded in order to suffocate me. She also wanted to weigh me down with herself, like the wraps with which the Ancients mummified their cadavers. I am writing a book of poetry, maybe I will create a big silence after having written it, a silence wide and beautiful, in which there would not be this urgency to rename everything. I want a solitude of my own, not shared with her at all, that when it happens it would have the power to annul me. I am writing a strange book, not because it is original, they have erased everything in their caves, our predecessors. The authentic thing is the engagement, I need to undress always, I need to put myself forth before the astonished eyes of the public.

Of Poets and Cesars

Poetry does not need any beneficence
or charity
to the poet what is the poet’s
to Cesar what is Cesar’s.

I have noticed how some women check and breathe themselves until their own scent mortifies them. Writing is also searching for a scent among an obscenity of aromas, and retaining it. 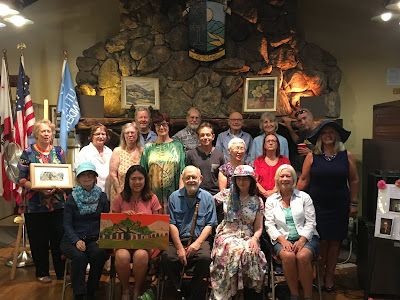 The Art of Tanka reading presented by Kathabela Wilson and a team of tanka poet on August 26, 2018 was filled with talented artist and new information.  Painter Jennifer Benston discussed her art, portraying the notable oaks of California, with a large portrait of a 400 year old oak tree on the campus of the California Institute of Technology, that died not long after the tanka poet immortalized it in verse. 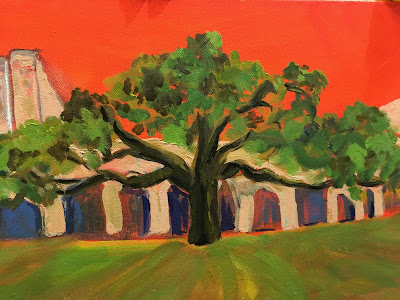 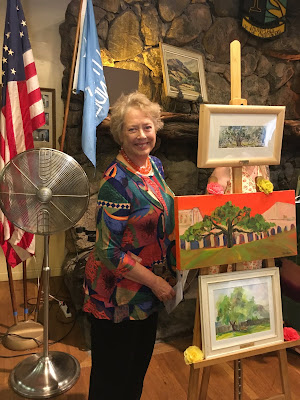 Jennifer Bentson with her artwork 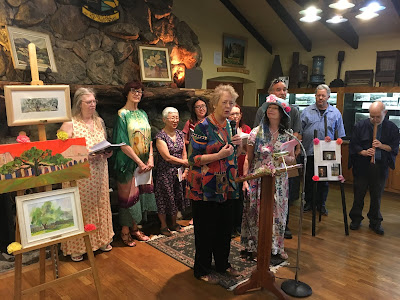 We had a "Tanka Sunday" in Tujunga! We read of Ribbons, Atlas Poetica and I sold some of my Owl Still Asking (Tanka for Troubled Times) as a donation to Village Poets and Bolton Hall. I gave short intros to each reader and commented in dialogue during the whole program. Then as the finale of the first half, I led a writing session with handout, an interesting page of unique instructions and examples. After our second half performance concluded, I gave newly created handouts for cherita writing to the audience as time was predictably short. The second half open readers continued with free verse. 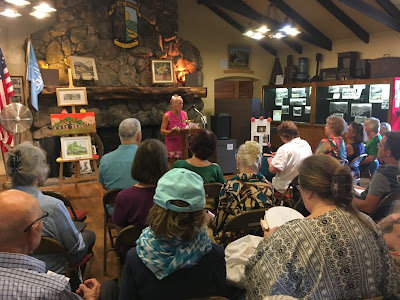 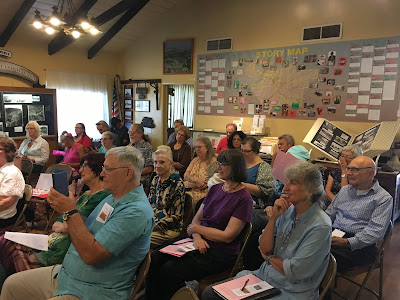 Audience of Poets at Bolton Hall 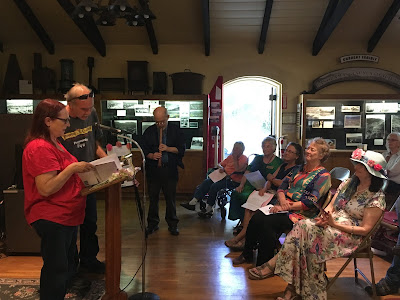 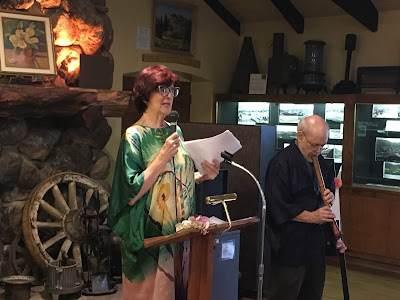 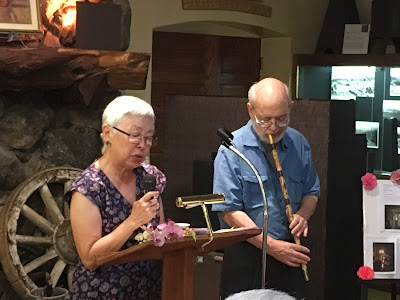 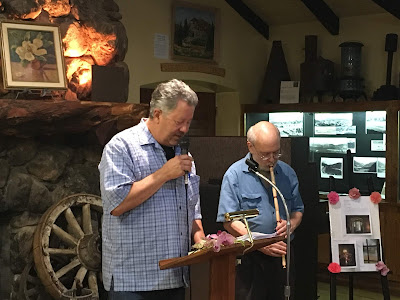 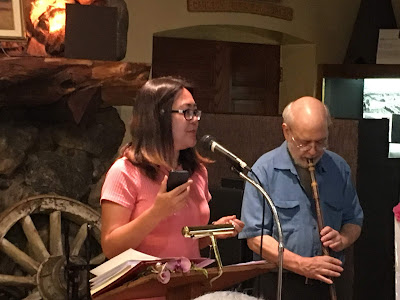 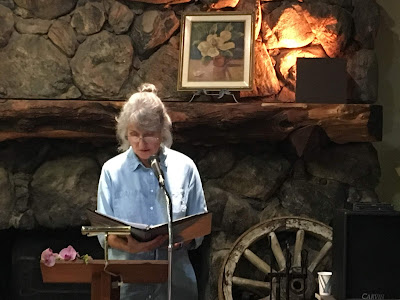 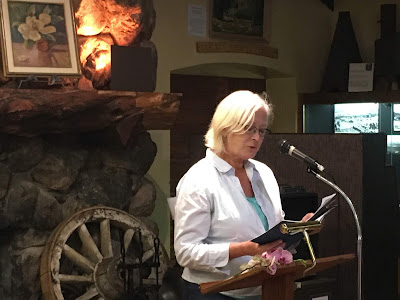 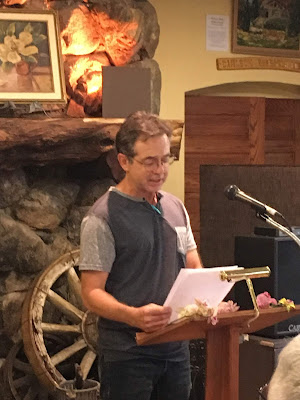 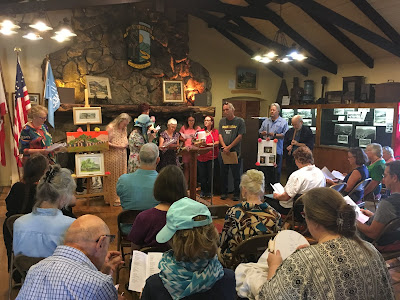 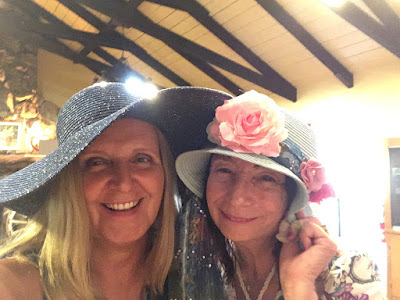 Posted by Maja Trochimczyk at 12:46 PM No comments: