After a wonderful and inspirational reading by the incomparable Sharmagne Leland St. John, the Village Poets have another poetic delight planned for October. Painter and poet Stephen Linsteadt and poet Maria Elena B Mahler have been scheduled to read their work and present a new book of poetry inspired by Stephen paintings on Sunday, October 28, 2012, at 4:30 p.m. at the Bolton Hall Museum in Tujunga, California (10110 Commerce Avenue, Tujunga).  Poets who have contributed to the Woman in Metaphor book of painting and poetry are encouraged to come and read their work from the book during the Open Mike segments of the afternoon.

We regret to inform you that due to our scheduling error Maria Elena B Mahler will not be able to appear at this reading, which was initially planned for October 21, 2012. Instead, she will be invited to return at a later date. On October 28, Maria Elena will be with us in spirit and will be represented by a couple of poems read by others. 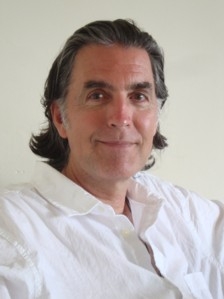 Stephen Linsteadt is a painter, poet, and writer. He is the co-author of The Heart of Health; the Principles of Physical Health and Vitality. His latest book is titled Scalar Heart Connection. His poetry is published in Moments of the Soul (Spirit First), Solstice, Cradle Songs (Quill & Parchment Press), Saint Julian Press, Poets on Site, and others. His paintings have appeared in Reed Magazine, Badlands Literary Journal, and Birmingham Arts Journal and can be seen at StephenLinsteadt.com. His most recent project is an anthology of poetry based on his paintings, Woman in Metaphor.  A sample poem from the book is reprinted below. 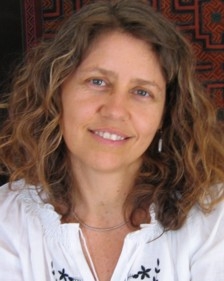 Maria Elena B Mahler’s poetry has been published in English and Spanish in Badlands, Solstice, Quill & Parchment, Global Alchemy, Saint Julian Press and Poets on Site. She was a finalist for the 2011 San Francisco-based Primer Concurso de Poesía Latinoamericana en Español, and is published in the anthology by Colectivo Verso Activo. Recently, her work was also selected for the Spanish anthology Se Buscan Quijotes, published by El Centro de Estudios Poéticos in Madrid, Spain.

Maria Elena also co-authored the non-fiction book The Heart of Health (Truth Publishing Co.) and enjoys writing fiction. She was raised in the South of Chile. After graduating with a degree in Communications, she lived and worked in Mexico and Canada, and finally settled in the Sonoran Desert of Southern California in 2003.

A wale of rock jumps out of the land
and freezes above the earth;
the backdrop to “Starry Night”
painted close to where green bathed
the artist’s vision in a yellow
tainted room.

The scent of Languedoc
still warm about your neck.
Thunder uncoils over the night.

Rain on my umbrella
drops of deep mystery. Madness in May
only warm iris blossoms understand.

You can’t complain that I’m singing
this is an asylum.

And where are the human beings
who once lived in the olive groves?

We were compelled to keep our distance
from the chapel.

Pigeons cooed then waited
for the echo to reverberate
off its stained glass walls.

Nobody knows her name, only the color of her skin.

If I had a photograph of her face
it would be sepia cracked by the storms over Mapuche land.

Her eyes would be dark stones of lava and

Above Alerce forest, pumas draw the circle.
In my dreams I have seen her chewing chamico.

Along Chilean valleys, water runs horizontal
spoiling the virginity of Andean snow, where la Machi
got sweaty under the Araucaria tree.

Their passion over the still wet moss was all they had
between them.

The impediment to their holy union wasn’t the raven in her hair
but the bonds of duty as la chamana:
forbidden to leave the underworld.

Breaking the sacred law meant certain death
so she quietly gave up her fruit:
first a boy
then a girl — my grandmother.

Posted by Maja Trochimczyk at 5:56 PM No comments: 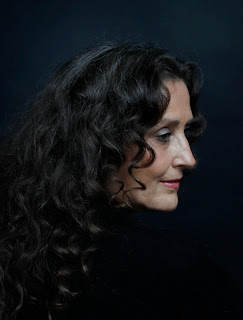 We are thrilled to welcome the wonderful Native American poet Sharmagne Leland St.John as Featured Poet of the Village Poets Monthly Reading at Bolton Hall Museum on September 23, 2012 at 4:30 p.m.  The event also includes an open mike for poets and refreshments served courtesy of Marlene Hitt and Mari Werner. A hat will be passed to collect funding for the hall's renovations. The Bolton Hall is located on Commerce Avenue in Tujunga California  and it is hard to miss - the only building of river-stones among a sea of stucco.
Sharmagne Leland-St. John, 5 time Pushcart Prize nominee, is a Native American poet, concert performer, lyricist, artist, and film maker. She is the Editor-in-Chief of the poetry e-zine Quill and Parchment.com. Sharmagne spends time between her home in the Hollywood Hills, in California and her fly fishing lodge on the Stillaguamish River in the Pacific Northtwest.  She is the founder of fogdog poetry in Arlington, WA and tours the United States, Canada, and England, as a performance poet.
She is widely anthologised and her poetry and short stories appear as well in many  on-line literary journals.  She has published 4 books of poetry  Unsung Songs (2003),  Silver Tears and Time (2005), Contingencies (2008),  La Kalima (2010), and co-authored a book on film production design. Designing Movies: Portrait of a Hollywood Artist (Greenwood/Praeger 2006). Sharmagne is co-editor of Cradle Songs: An Anthology of Poems on Motherhood (2012).
_________________________________________
EL NORTE
El Norte.
A prayer upon her brown lips.
El Norte.
A dream growing like
plumeria blossoms from
empty chambers in
her heart.
In El Norte
she can make a decent wage.
Her children will not go to bed hungry.
She quits her job at the plantation,
kisses her children’s warm cheeks
as they sleep;
says goodbye to Columbia.
The Rio Grande behind her,
she now mops my neighbours’ floors,
scrubs their  toilets
for ten bucks an hour.
By the time she pays rent for her room,
buys bus tokens, and junk food
there is little left to send home.
Her children grow up without her.
Abuelita sends black and white photographs.
The little one is still frail and thin.
El Norte
The Land of Milk and Honey…
The Promised Land he believes in.
He’ll go on ahead,
send for his children one by one;
then his wife and the baby.
Under the sweltering
San Fernando Valley sun
he pushes the market basket
as he picks through
the neighbourhood trash;
for glass and aluminum
to recycle for pennies.
Surely his job teaching
the village children their ABCs
was better than this.
In the marketplace in El Salvador
his wife almost forgets she is married.
The man with the gold tooth
smiles at her as he wraps the fish
in newspaper…
adding an extra piece now and then.
She misses her husband,
but has nothing to confess to the priest
as he leans in closer
to hear her sins.

Posted by Maja Trochimczyk at 10:14 AM No comments: