The Poetry Reading at the "Bite Me" Art Exhibition at McGroarty Arts Museum on March 16, 2013, was such a great success that we decided to add more poems to those published in the preview two weeks ago.  The exhibition, curated by artist Danielle Eubank, explored sensory, aesthetic, psychological, political, and historical aspects of food, from its cultivation and gathering to consumption.


Bryan Story wrote and read only one food-related poem that was, to quote the author, "vaguely positive."
LIKE BLACK EYED PEAS

by Bryan Story
delirious with sugar he heard his fork on it's way
to the kitchen say to his spoon "they are what they eat"
"that's what they always say" said the spoon
"but this boy's just fat, not so sweet from eating all this pie"
scolded by tableware, he thought what about black eyed peas?
these noble beans brought by shanghied farmers
not so thrilled to crack somebody else's corn but glad
to grow and eat cow-peas with a born again name
after a mess of mustard greens and yellow maters and
biscuits bathed in red eye gravy, Mom said
"clean your plate if you have room for some blueberry"
which she set before his eyes and rolled her own
two black eyed peas she got from her father
who got them from his Blackfeet mother who
with the help of his Irish father, gave them to him
and so with help from granma gave them to the
fat boy's mother, whose Irish eyes were smiling
like black eyed peas, and he thought
mouth full of cobbler nothing could be better
(C)2012 William Bryan Story Jr.


Former Poet Laureate of Sunland Tujunga, Joe DeCenzo read two poems, one a retelling of a family story and the other one for fun...


The Merchant of Sound

He mends his gear by lamplight
Before the first set at dawn.
The captain of Cordova raises his crew
By pumping fuel into the propane grill
And setting breakfast on to sizzle.

In the same clothes he’s worn for the days
He steps into his grimy yellow pant bibs
And puts his rain slicker on.
It’s first light.  The salmon are running.
It’s time to haul the seine.

No GPS, No sonar
Just his instinct and knowledge of the water
He’s lived on since he was born.
He sees the dancing shadows
On the surface of the sea
That will be his payload.

He orders the skiffman to his rig
And tells him to head for shore.
The taste of liquor is all that kills
The greasy diesel fumes in his throat
And briny smell of fish guts on the deck.

With the lead line set
The corks chatter off the boat
Like a strand of pearls
Dropped into a glass of wine
As a quarter mile of net
Pays out over the stern.

From the helm he sees his grandson
Pumping the bilge, preparing the hold
And plunging the water
To scare the school of pinks into the net,
Remembering his days
When he was the greenhorn.
Whatever fish escape his clutch
And make it to the brackish water
Of the river inlets are home safe
Free to fight the bears and eagles
For a chance to spawn.

Steering the Bunny C. about,
He bellows the order to “close up!”
A scrambling crew draws the purse line
Harvesting the crop of Nelson Bay.
It’s a big set and the Bunny C. tips
As the power block struggles to pull the seine on deck.

Hundreds of tails hopelessly flap
In the pile of seaweed and jellyfish
Brought in with the catch
As they’re dumped into the hold;
The skin beneath their scales
Emblazoned with color.

Twelve more sets and the hunter of Hawkins Island
Radios the tender to sell his load and call it a day.
For three weeks, he and the crew
Live on the freshest fish, the stalest bread
And whatever canned goods the tender can purvey.

He rinses out tomorrow’s shirt in the galley sink
Hanging it to dry near the exhaust stack.
He draws a smoke and throws scraps to the otters and gulls
Having just pulled a thousand meals
From the endowment of the Sound.

Don’t Put That In Your Mouth

Ingredients or additives, what difference does it make
When you’re chewing on and sucking down the filling your cake
To taste so damned delectable must surely be a sin
So don’t put that in your mouth because you don’t know where it’s been

By the time of the exhibition, Maja Trochimczyk did not yet have the proper image of the yellow sky that is needed to appreciate "The Taste of the Sky" about a Polish desert, an ice-cream substitute from Poland of the 1960s.


The Taste of the Sky

My mother's zupa nic - soup nothing
had puffy clouds of egg whites
floating in a yellow sea
of delight. I chased them
with my spoon that perfect summer.

They go about their daily chores
folding sheets, baking bread,
I'm cooking up a storm
of dreams that will soon vanish
like clouds in my soup nothing 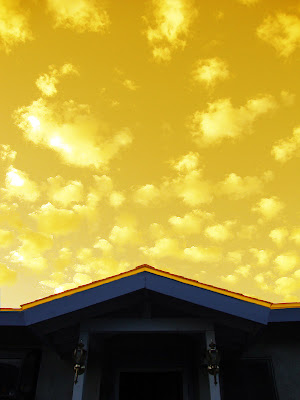 
Album of pictures from the reading is now available on Picasa Web Albums:

Village Poets at the Bite Me! Exhibition
Posted by Maja Trochimczyk at 11:03 PM